Chau, Beyond the Lines

An Oscar Nominee in 2016, Chau, a teenager living in a Vietnamese care center for kids disabled by the chemical Agent Orange, struggles with the reality of his dream to one day become a professional artist.
READ REVIEW
Next Previous

Chau, Beyond the Lines 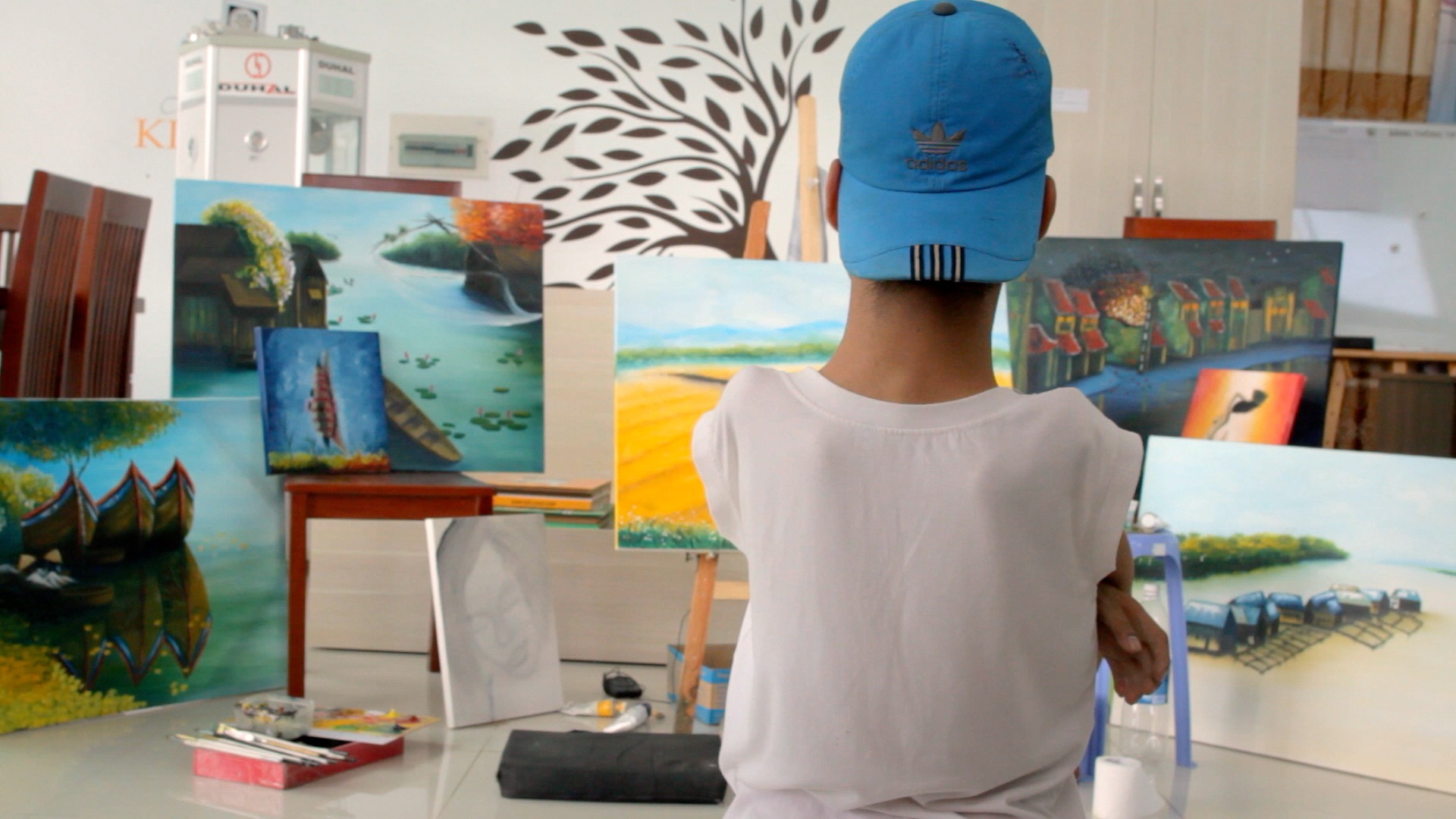 One of the truly amazing artist profile documentaries of recent years, Chau, Beyond the Lines follows an 8-year journey alongside its titular subject, from Chau’s residence in a special country-side care center for severely disabled children, through to his triumphant ascendence to the status of self-sustaining artist in the big city. Along the way he becomes a verifiable celebrity in his native Vietnam, and a potent global symbol for a generation of Vietnamese suffering the still-lingering effects of Agent Orange use during the Vietnamese war.

The story arc feels familiar, but this standard narrative, like that in one of this year’s Oscar nominated documentary shorts, Heaven is a Traffic Jam on the 405, is no less remarkable for it, and the sheer length of the film’s production process allowed for a realtime development of the story in a way that is incredibly rare in shorts. Chau’s disability makes the resultant journey feel impossible at the beginning of the film. His arms dangle from the sides of his body in a nearly useless state, and walking is impossible—he shuffles along, his one functional leg dragging the other at the knee. He draws and sketches by hand at the start, but it will take conceptual breakthrough later on for him to achieve his true potential.

Like many artists, Chau was an indifferent student, and incurs the wrath of his caretakers early on in the film who discourage his far-fetched aspirations. They seem cold, yet one must concede the clear-eyed reasoning behind their reproach—already facing a life with the odds stacked against him, is it wise to pursue fanciful dreams of art? Survival itself will be a challenge, eventually Chau will age out of his care center, and Chau’s family in the country-side is ill-equipped to care for him. 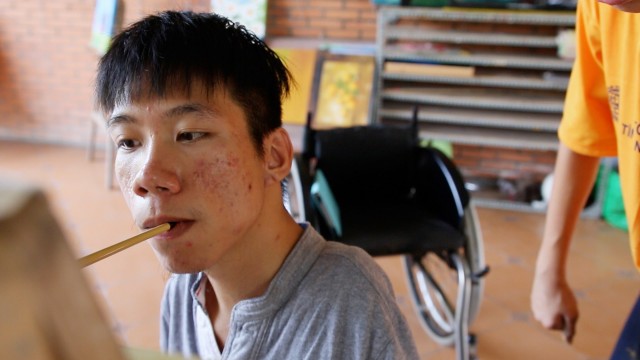 With the stakes set so high, Chau’s perseverance and pluck is astonishing to witness and a major source of the film’s appeal. It is also a credit to director Courtney Marsh, and the serendipitous magic of the documentary film process. In a normal profile doc, you know what you’re going to get story-wise. It’s usually retrospective, and relies on interviews to catch viewers up on a journey that is already well underway. That was not the case with this film. Marsh in 2007 was an undergrad at UCLA, and, equipped with a good friend who was Vietnamese, naively decided to embark on a feature film documentary about Vietnamese street children. A few small grants later, she was on the ground in the country searching for her story.

In a piece published on Aljazeera, Marsh describes the origin of the very different film that came to be.  “Because we had to get permission from the government to legally shoot in Vietnam, word got around, and a Vietnamese television producer met us at our hotel. He thought our subject matter was fine, but trite, so he offered to take us to a “peace village” tucked away in the back of a maternity hospital. This peace village was Lang Hoa Binh: a care centre for kids disabled by the chemical Agent Orange.”

After volunteering at the center for a couple of weeks Marsh started to film. Originally she meant to center the story on 5 different children, but found herself increasingly drawn to Chau. In that same article she describes Chau by saying, “He knew exactly what he wanted to do at age 15 and he wouldn’t take “no” for an answer. Maybe because I too was trying to prove myself as a filmmaker, I personally related to him. But overall, I just realised Chau’s arc needed the focus. Chau’s story is something we all go through: growing up, wrestling with our dreams and demons, wondering how our lives will turn out.”

Production difficulties drew the timeline for completion of the film out, and the delay proved to be fortuitous. This gap gave Chau time to progress on the path he had set for himself, and lead to one of the rarest elements in a short documentary—a third act. As Chau kept resolutely moving forward, the story expanded, and 7 years later the film was able to end on the kind of triumphal note that Marsh fervently hoped for, but could have hardly predicted.

While the third-act is the most noteworthy element to the film, the time spent early on at the Lang Hoa Binh Peace Camp is its heart. Seeing the kids in their daily lives is profoundly moving—if problematic. It is pretty much a given that when you put charming disabled kids in front of a camera, you’ll be able to evoke sympathy. This vicarious evocation of emotion is sympathy porn, yet Marsh, to her credit, slyly critiques this tendency by including numerous shots of tourists who come to the peace center, cameras in hand, to take photos of the children as if they were zoo animals. These tourists are not unlike Marsh herself in some ways, but unlike them, Marsh put in the time, working with the children in the center, bathing and feeding them for weeks before she picked up a camera. This earned access enabled her to share the epiphany she reached while spending time with them. Writing to us, she remarks, “When I started the film, what really struck me was that kids are kids, no matter what label the outside world gives them. The children in the center were poster children for Agent Orange, a chemical they didn’t really know or think about. They cared about candy, soccer, toys, and their own dreams. It was those children’s perspectives that transcended the gravity of the Vietnam War for me.” Notably Agent Orange isn’t even brought up in the film until 11 minutes in.

That said, the children and Chau, have indeed become “poster children” for the issue of Agent Orange contamination in Vietnam, and the success of the film, most notably its Oscar Nomination in 2016, has lead to increased awareness. Global press wrote about the film, and on June 28th, 2017, Chau, Beyond the Lines screened for members of the U.S. Senate, House of Representatives and the State Department. It has been a remarkable journey for the film, and incredible validation for the 8 years that Marsh spent with it. Now after 2 years on Netflix, Chau, Beyond the Lines is being released for free on the web in the hope that its inspiring story will reach even more people.

For Chau, life goes on, and he continues to make his art, with several pieces currently up for sale. For Marsh her journey in film likewise continues. Before we’d even heard of Chau, we had featured Marsh’s short film Zari, which we found to be one of the most polished and unique sci-fi films of 2015, proving her diverse cinematic talent. Perhaps burdened by the memory of Chau, Beyond the Lines’ lengthy odyssey, Marsh is continuing to forge ahead in the scripted narrative space, and tells us that she is currently working on a feature length film. We hope to be able to share details soon!