Ellen is recycling stuff before she heads overseas — including her boyfriend. She decides to gift him to a new girlfriend, but can she really give him up?
READ REVIEW
Next Previous 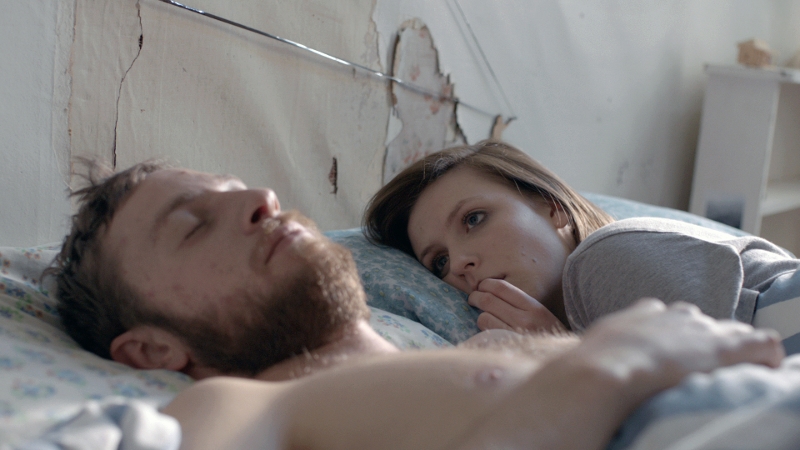 Break-ups suck. Especially when the love and passion haven’t slowly decomposed into dreaded indifference, but instead are just as alive as when the relationship first blossomed. Ellen is Leaving is a story about a break-up just like that, but with an added twist. Director Michelle Savill and writer Martha Hardy-Ward push the plausibility of their narrative, but ultimately succeed in fueling audience affection for the characters. The 15min short is a brilliant example of elegant simplicity in film, executed with the lightest of touches and peppered with humour and tenderness, which will deliver a delicate tug of your heartstrings.

Ellen and Hamish have been together for 3 years. They are still very much in love, but are having to face a painful separation as Ellen has decided to go traveling abroad. As she is sorting out her belongings and coming to terms with her choices, she sets off on a mission to find a replacement girlfriend for Hamish, someone who’ll be there for him when she is not. Ellen is Leaving is heartwarmingly romantic, genuinely funny and oddly believable.

Savill and Hardy-Ward were interested in making a “quarter life crisis” film. “Heartbreak and dysfunctional relationships are a hallmark of your twenties and we wanted to explore this intense and messy time in a relatable way” – Hardy-Ward explains. “It was an original and darkly comic idea that offered humorous and heartbreaking opportunities – which is exactly the territory I like to explore” – Savill adds.

Whilst Ellen’s character was not based on anyone in particular, the film was inspired by real people and experiences, which were masterfully interwoven into this beautiful end-of-love story. Even the break-up party in the short was based on one, thrown by the director and her boyfriend at the time. These details play a big part in making the characters relatable and therefore believable. As Hardy-Ward puts it, “hopefully some viewers will recognise a version of their younger selves in Ellen – even if they’ve never taken the questionable action of trying to gift their boyfriend to someone else!”.

The romance in Ellen is Leaving is portrayed with eloquence and deceptive ease. In the very first scene, before we even see Ellen and Hamish together, we discover just how close they are. When she opens the box of presents picked for her travels by her boyfriend, she does it with such tenderness and care, savouring the meaning behind every single object. Or when Hamish tapes her passport to his chest in a playful act of defiance, a refusal to accept she is really leaving. On paper, the plot may seem stretched at best, and flaky at worst, but by including these heartwarming moments, Savill and Hardy-Ward make their characters so lovable, the audience can’t help but feel deeply emotionally involved with their story.

Ellen is Leaving has had a massively successful festival run stretched over the past 5 years and even won the Grand Jury Prize at SXSW back in 2013. Since then, Savill has been developing a feature called Millie Lies Low, a comedy about a woman struggling with status anxiety, as well as a TV series with Sophie Henderson and Chelsie Preston Crayford called Wall, a comedy about a woman who finds a wall in her vagina. Hardy-Ward, in the meantime, has been working on two features based on New Zealand novels, so keep an eye out!