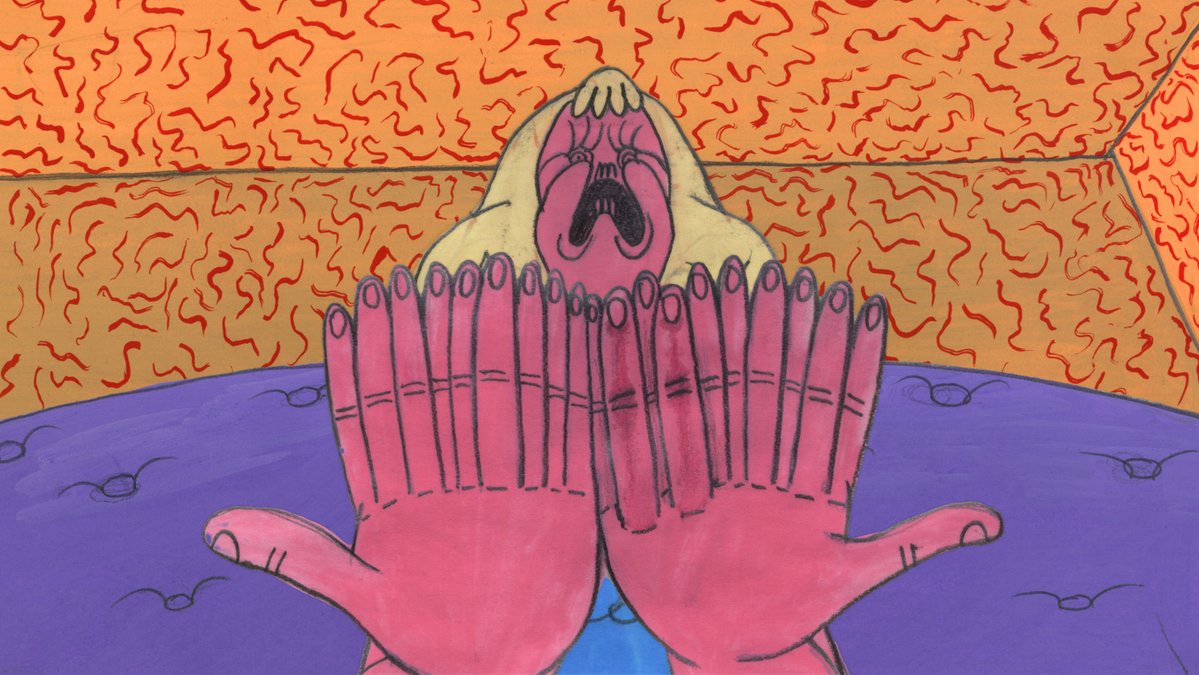 My first tendency when typing up this review was to slap our NSFW “Mature” tag on it. There isn’t any nudity or extreme violence in the film, it just really feels wrong to watch, as Matt Reynolds, an animator on our radar for a couple of years, taps into some deep part of his id to produce an entertaining but viscerally disgusting story.

Blending body horror with a fairy-tale journey towards acceptance and belonging, Hot Dog Hands begins with a woman’s extreme distress surrounding her body’s tendency to spontaneously, and repeatedly, produce extra fingers. Ashamed and isolated, she searches for a solution fruitlessly, and discovers it is an unusual place—her local mailbox!?

Reynolds relates to us that the film was fleshed out as a reconciliation of these two separate images—the woman with extra fingers, and a man in a mailbox. He writes, “I wanted to approach it as an ecosystem that had been disturbed and was struggling in unexpected ways to find balance. Thinking about the impending collapse of the US Postal Service, there’s obvious consequences like automated drones replacing mailmen and women, but what if there were more bizarre side effects like spontaneous appendage growths or an underground cabal of displaced mail workers(…)? It was a real joy writing ways to establish this imbalance and then find ways for this imagined ecosystem to regain equilibrium.”

As that quote shows, there is a level of intentionality and thought to Reynolds’ work that belies its impression as bizarre and stream-of-conscious. Of course one might have concluded that simply through the method of production—the film was animated and painted entirely by hand with gouache on paper, a painstaking and meticulous process that demands purpose from its practitioners. While old-fashioned, this hand-crafted approach, paired with psychosexually surreal imagery, has created a style that is instantly recognizable as belonging to Reynolds. Via pieces like Bottom Feeders and Sport in the Land of Plenty, he has gained recognition for his unique voice both on the internet and festival circuit, and this year was asked to create the bumpers for SXSW, a prestigious spot for emerging directors that has previously gone to filmmakers such as Danny Madden and Lauren Wolkstein.

Hot Dog Hands is his most accomplished work narratively to date though, and has picked up impressive awards so far, including Best Animated Short at the San Francisco International Film Festival, as well as the Jury Award at Ann Arbor. We are proud to co-present its online debut today alongside Cartoon Brew as part of its CB Fest, make sure to check out the rest of the shorts in that expertly curated program!