A 90 year old Jewish woman reflects on her life’s experiences as she prepares to try bacon for the first time.
READ REVIEW
Next Previous 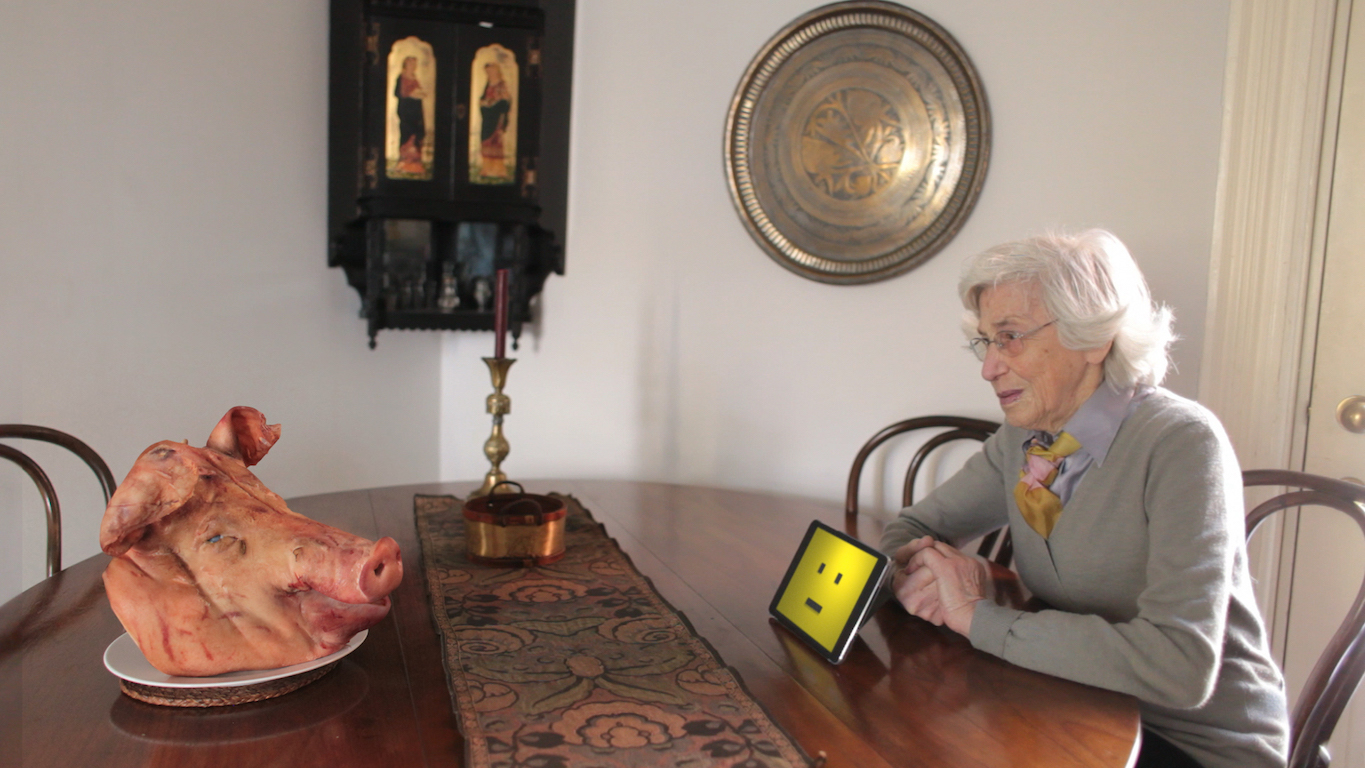 I sometimes wonder if there’s a correlation between the rise of the Internet and the demise of organized religion, and while this may not be true for the world at large, it is certainly true for Razie Brownstone, a ninety-year-old woman who, after discovering “The Google”, “went very quickly from Julia Child to Christopher Hitchens.” Bacon & God’s Wrath—which played at TIFF, SXSW, and Sundance—is a subversive documentary about one woman’s rejection of the Jewish faith, and if you came here because you wanted to see a 90-year-old woman eat bacon for the first time, please prepare yourself for disappointment—bacon is a minor character.

Our main character is Razie, who led a normal adult life before discovering the Internet, which gave her answers to life’s biggest questions. Charming and full of life, Razie speaks of her former Jewish beliefs in a way that is extraordinarily self-aware. She says things like “I’m gonna skirt around your question” and “I’d rather not talk about it,” and she maintains a level of control over her story that is relatively uncommon for an interview subject. She has succeeded in pulling the curtains off her religious beliefs, and she is now pulling the curtains back on the documentary process—which she comments on constantly. The self-reflexiveness is not limited to Razie, though. There’s a bookmark on her (or Sol’s) laptop that says “animation festivals.”

Though Razie doesn’t seem to think of her “newfound” non-believer status as that big of a deal, she does seem to have some hesitations about the whole thing. There’s an underlying sense of existential anxiety in the things she says, which is understandable for someone who spent their whole life thinking one thing was true, only to end up thinking another. Though we don’t see her facial expressions in the film’s most climactic scenes, we do see her hands fidgeting nervously on her lap as she speaks. These hands are a nice break from the facial expressions we have come to expect from interview subjects, and they are perhaps more telling.

“It’s courageous to choose the truth, even if it means abandoning what you know.”

Despite the whole “Jewish bubbe eats bacon” thing, the film is a lot darker than advertised, and this darkness is mitigated by Sol Friedman’s animation. In one cute-but-horrific sequence, Razie tells the story of her Great Aunt, who had her tongue chopped off as a child for eating a non-kosher gumball. According to Sol via email, the aforementioned scene was drawn “with a good ol’ fashioned ballpoint pen on newsprint pads,” which seems quite fitting and old-fashioned for a story that took place so long ago. There’s a seamless mix of animated figures and real-world people throughout the piece. My favorite instance of this is a strange, absurd exchange between Sol and Razie that takes place before the bacon-tasting excursion. Sol’s voice comes out of a Lord of the Flies-esque pig head, while Razie’s comes through a talking iPad that sits in front of her unspeaking body. It seems as if Razie has harnessed the power of technology to stand up to the spectre of temptation—and her interviewer. She is no longer scared, and no longer silent. Regardless of what this exchange is supposed to mean, these are not the kind of talking heads we generally see in documentaries.

While the battle between logic and faith is one of mankind’s oldest, nothing about Razie’s narrative feels common. It is clear that she, like many others, prefers the encyclopedic certainty of “The Google” over the guessing game of faith,  and can anyone really fault her for that? Though her community might view her actions as shameful or transgressive, it’s clear that her decision to abandon her faith is inspirational and courageous. Regardless of your religious beliefs, it is an absolute treat to hear Razie elaborate so lucidly on her loss of faith, and what it means—or doesn’t mean—for her self-identity.

This film is presented by The New Yorker’s Screening Room, and it is also in competition for The Wrap’s Shortlist Film Festival. Go vote! You can check out Sol’s last Short of the Week feature here.