*Scroll down to view the film* Written and directed by DANIELS (Swiss Army Man), POSSIBILIA is an interactive love story set in the multiverse. Alex Karpovsky and Zoe Jarman star as a young couple contemplating breaking up. You witness the events from any of 16 different perspectives.
READ REVIEW
Next Previous

Billed as “the world’s first interactive narrative film“, Possibilia is a poignant, playful, and utterly remarkable film experiment that exceeds by far any expectation one might have for such a project. A masterpiece on most every level, the work is notable not only for the technical precision involved in pulling off a historic first, but for its intellectual profundity and deeply emotive storytelling. Through a great script and excellent, challenging, performances by its two leads, Possibilia is technology put into the service of truthful, human storytelling, and serves as the high-water mark for the still nascent medium.

Conceived, written, and directed by the dynamite duo DANIELS, the project’s tagline is “An interactive love story set in the multiverse…whatever that means”. Starring Alex Karpovsky and Zoe Jarman, Possibilia is a 6min conversation of a couple on the verge of breaking up, as they share their gripes, desires and regrets, while challenging each other to find meaning in amidst the existential anxiety of all that could have been, and, maybe(?), could still be. The interactive trick is that, at key moments of the conversation, the reality of the world splits—as a viewer you have the freedom to veer off into several different versions of the conversation, each following the same script, but shifting radically in tone and action. At its disorienting peak, 16 different versions of the conversation are presented. But, for the viewer’s sanity, DANIELS guide the proceedings back down, collapsing the multiverse, closing the film again from a single viewpoint.

The project was commissioned by Xbox Live Entertainment, produced through the prominent production company Prettybird, and built on technology from the Interactive storytelling company Interlude. The toolset used, Treehouse, has been rebranded as Eko Studio, and is the platform powering today’s release. An old interview with DANIELS in the dearly departed online magazine The Dissolve, is pretty informative about the nuts and bolts of how the collaboration came together, as well as providing some deep insights into the production of the experience itself.

While that interview paints a seat-of-their-pants affair, the experience is thoughtfully constructed, though not nearly as complicated as it appears on first blush. The script, a loose outline assembled by the filmmakers and developed in a short period in partnership with its actors, is necessarily generic due to the requirements of needing to be performed across 16 different scenarios, yet it thoughtfully touches upon important truths common to many relationships. The chaos of the exploding perspectives is undergirded by a basic logic, as the views double at specific points of the film, branching off in a tree formation, splitting from the distinct view that preceded. Thus certain sections of the viewbar, seen below the film, share spatial or thematic concerns, and interesting symmetries are uncovered upon repeat viewings. 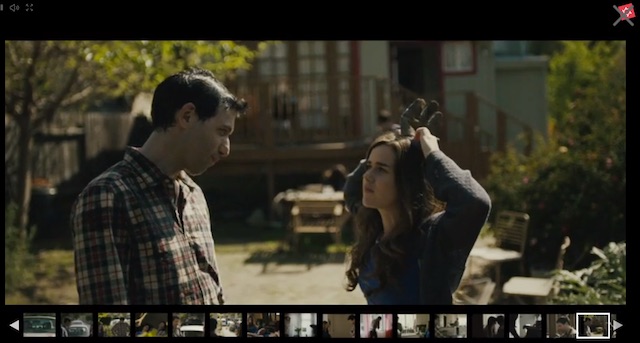 Screenshot of the interface

Utilizing the “Channel surfing” schema familiar to Interactive fans from the famous Bob Dylan music video, the marriage of content and form in Possibilia is a perfect advertisement for the fundamental promise of Interactive. Cinema is a time-based medium, but through the tricks of the trade it is manipulative of that experience, extending it , eliding it, collapsing it. One great use of Interactive is providing perspectives adjacent to the temporality of the film, be it supporting material in a “railroad” style experience like HighRise, or here, allowing the viewer to diversify perspectives. The theory of the multiverse, the mind-boggling consideration that there is an emergent potentiality in any moment, is perfect pairing for what Interactive can offer that cinema cannot. DANIELS thoughtfully sculpt that experience, providing enough freedom to draw the viewer in, and, to borrow a word from the previously linked interview, “implicate” the audience in the development of this couple’s dissolution, but still provide a firm directorial hand, preventing it from overwhelming its audience. In doing so, they stay true to the project as filmed entertainment versus video game territory, where implication and control proceed onward to agency and responsibility. By ending the film in the same place, Possibilia encourages play and rewatchability, but does not induce angst over paths not taken.

I first saw the Possibilia at its debut at Tribeca 2014. As a big fan of DANIELS, I was eager to see what they cooked up, but approached the event with some trepidation—already at this point I was down on Interactive media, which had been the buzzy topic of the previous few year’s festival circuits. We had awarded the brilliant NFB documentary Welcome to Pine Point, as Short of the Week’s Film of the Year in 2011, but the intervening period had failed to deliver on this promise in my mind. The form had taken hold in the documentary community, but too often I felt it was misused as a framework by which to “data dump” the hours of unused footage endemic to any documentary project, and force the viewer to wade through the tedious task of constructing a rich narrative which, historically, is a well-paid editor’s job.

Possibilia re-opened my eyes to Interactive’s potential, and also happened to awaken me to new dimensions of DANIELS’ talent. It was perhaps the first glimpse I saw that their quirky genius could be successfully translated from the visual medium of music videos and conceptual comedy shorts to dramatic scripted work with real emotional stakes (not to say that the duo didn’t leverage emotion before, even now, 20 viewings in, Simple Math can reliably bring tears to my eyes). We’re big fans of music videos and the talented creators of that arena, but the transition to scripted filmmaking is fraught for even the most talented of these. Possibilia fully shone a light on the potential that DANIELS were able to bring to bear on their recent feature debut Swiss Army Man, turning deeply introspective philosophizing into pop entertainment that is real and touching, but not shorn of humor or conceptual flamboyance.

At that premiere, I witnessed Possibilia performed on a stage. At Sundance 2015, it was a non-interactive display, a year later, at the Museum of the Moving Image, there were long lines to control the experience via a relatively janky iPad interface. Now, well over two years from its debut, Possibilia is available in it’s ideal form, as an online experience, to be fiddled with and explored by viewers at their leisure, rewatched again and again with complete control. I expect that it will make quite the splash. DANIELS do not need the acclaim that today’s release is likely to garner anymore though, Swiss Army Man was released last month to strong reviews and is climbing the charts of most successful indie film releases of the year. But, Interactive can surely use the buzz. Possibilia was the culmination of the Interactive film hype, putting the technology in the hands of gifted filmmakers on the precipice of a break-out at the exact moment that every digital content producer wanted to be at the forefront of this “new” thing. As what tends to happen to “new” things though, it became an “old” thing, and the hype cycle has reset—VR has entirely eclipsed Interactive in the creative technologist’s imagination, as numerous think pieces and festival sidebars can attest to.

This is unfair. Development of mediums cannot be expected to adhere to PR strategies and fiscal quarters, and it’s certainly not too late for Interactive, or Interlude (which has been the form’s greatest champion to date), but there is undeniably a sense of a missed opportunity. Interactive’s decline should serve as an object lesson to VR. Despite the buzz, despite the reams of digital ink spent conceptualizing the medium and praising its potential, no one really knew what Interactive was, and what it is for. More so, you can’t wrap your head around it through words, but you must be shown. VR has a content problem, and while it is still early in its hype cycle, backlash awaits if talented filmmakers aren’t given the tools, resources and freedom to invent. Interactive has declined in comparison to VR in buzz, but in fairness, VR has yet to produce a Possibilia. Now that the world can see Possibilia, today’s release can, and should, reinvigorate interest in Interactive and, well, the sense of possibility in the form, just like it did for me that day in April 2 years ago. The question is, is it too late?