The Shining Star of Losers Everywhere

In 2003, Japan was plunged into economic darkness, and its people needed a ray of hope. They found one in Haru Urara, a racehorse with a pink Hello Kitty mask and a career-long losing streak.
READ REVIEW
Next Previous

The Shining Star of Losers Everywhere 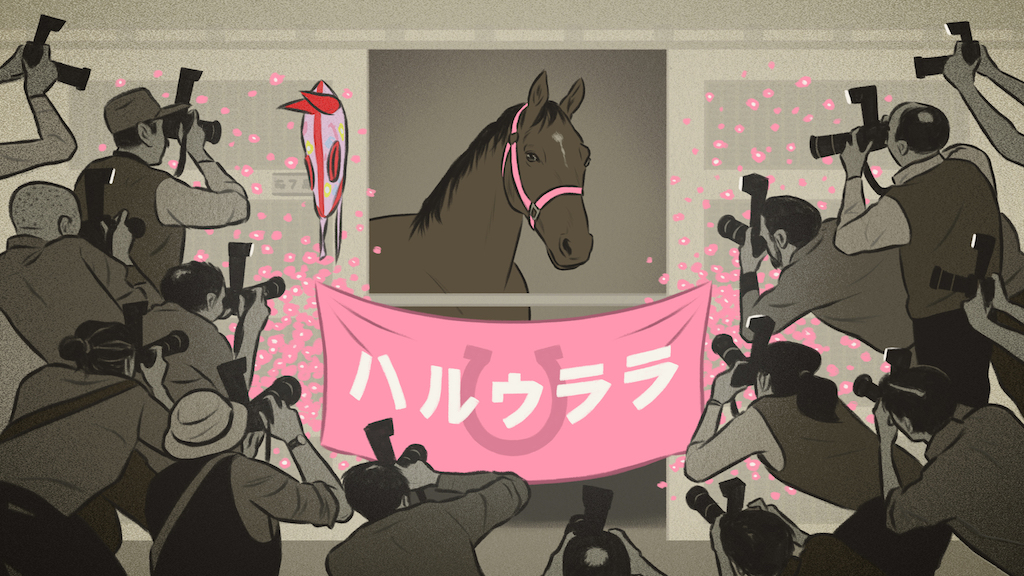 The famous Silicon Valley mantra of “Fail fast, fail often”, has permeated the culture, making the formerly shameful practice of falling on one’s face feel almost like an exalted practice. Yet, there is an expectation that by “failing often” one is creating the conditions in which to succeed eventually. But what if you never succeed? What if failure is never-ending? In The Shining Star of Losers Everywhere, filmmaker Mickey Duzyj tells the story of Japan’s most famous loser, a horse who could never win a race, and suggests that, through her popularity, maybe “failing always” can be ok too.

The film is a great success (winner of Best Short at HotDocs) due to an effective blend of timeless themes and contemporary visual and storytelling presentation. Made in conjunction with Espn’s 30 for 30 documentary series, the film adopts the slick, fast-paced, interview-centric format of those films, to tell an upbeat underdog story that proves that a certain narrative will never die: it doesn’t matter if you fail, as long as try your best to succeed.

Duzyj though, a gifted illustrator who has become much in demand over the last 3 years due to his collaborations with Victory Journal, No Mas, Grantland and The Ringer, provides the secret sauce that makes Shining Star notable, which is pairing this classic theme with his gorgeous, idiosyncratic animations, crafting the kind of hybrid doc that will put a smile on the face of even the most ardent horse racing atheist.

Animated sequences are experiencing a real moment right now in the feature doc world, with notable recent films Montage of Heck, I am Malala, and Particle Fever sporting animation sequences created by SotW Alumni. Animated sequences spice up the visuals of a film, breaking up the monotony of interview heavy documentaries, and filmmakers like Mickey are at the forefront of this trend. This innovative, animated blend has given us a new way to see the past, and I look forward to seeing what Mickey—and other filmmakers like him—will do in the future.

At the end of the day, this is the kind of short we need to see more often—one that spends eighteen minutes building up the world instead of breaking it down. From the very start, it is clear that Haru Urara is the only horse in this story worth paying attention to. She is a brilliant pink beacon of hope in the middle of a monochromatic, melancholic pit, and we should remind ourselves of this story whenever we feel bad about our failures. Even though slow and steady didn’t win the race (ever), it did win the hearts of a nation that was in dire need of hope. I can’t think of any better way to start off your Saturday than by watching a film about the powers of relentless positivity in the face of defeat.