Officer Arnaud loved his Mom. At her funeral he expresses that feeling...in a memorable way. Winner of the Sundance 2016 Grand Prize.
READ REVIEW
Next Previous 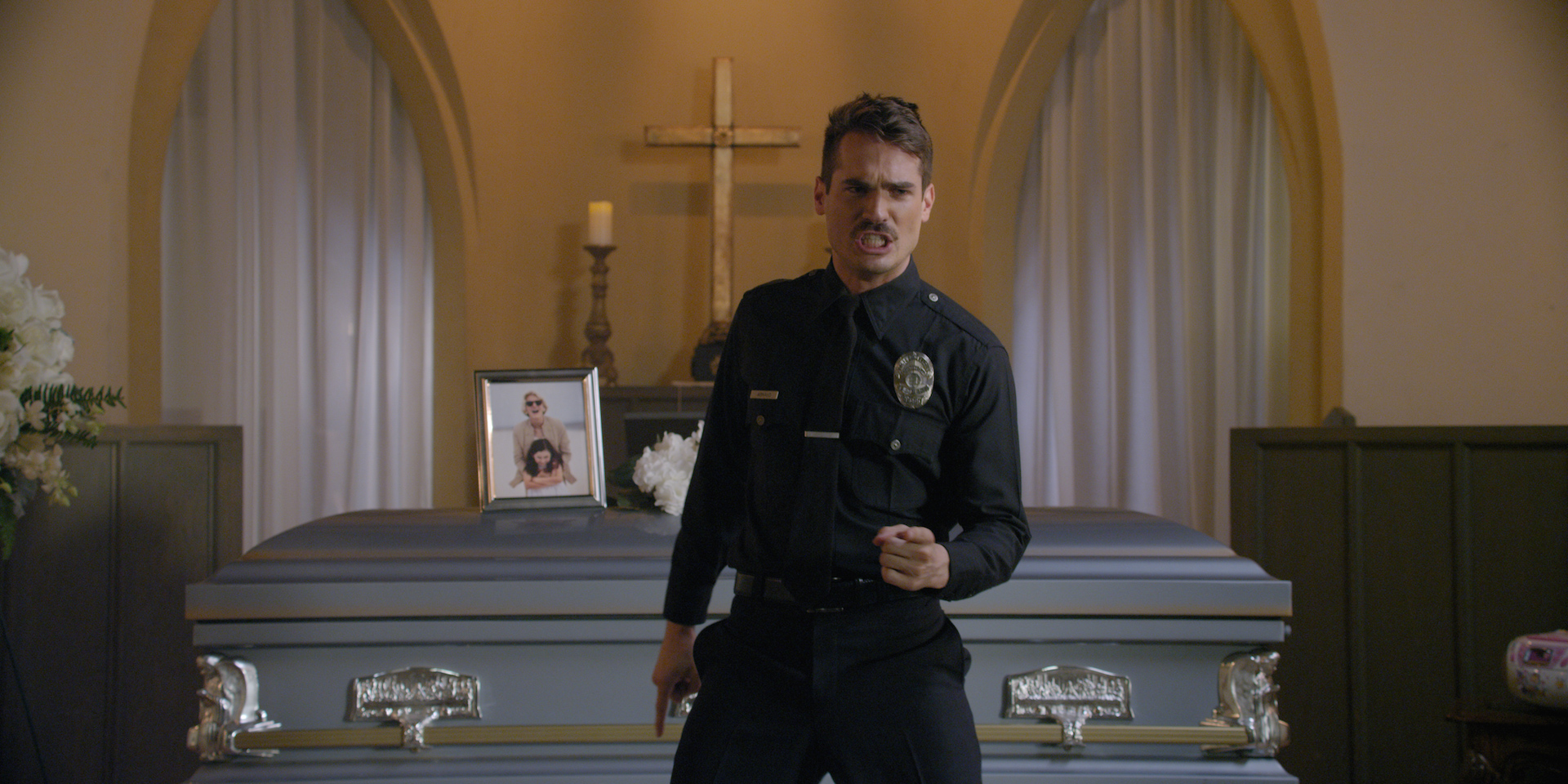 The toast of this year’s American festival circuit, Thunder Road triumphantly debuts online today after winning awards at Sundance, SXSW, Los Angeles, and Palm Springs, including the coveted Jury Prize at both Sundance and LA.

It’s hard to get stronger festival validation than what Thunder Road has received, and SotW will not present a contrarian position—the film is fantastic, and we’re happy to pile on when it comes to the praise (indeed, I already made my esteem clear as a jury member at SXSW this year). The plot description is simple: taking place at his mother’s funeral, Officer Arnaud goes up to give his eulogy, but, being a simple and plain-spoken man, he decides he needs a little help from a boombox and his friend, Bruce Springsteen.

The appeal of the film is its winning combination of excellent craft with emotional storytelling. Having seen it a few times now, my impression continues to shift between whether I’m more impressed or entertained by it. There are strong arguments for both: achieved in a single, continuous take, cinematographer Drew Daniels (Krisha) and team more than competently execute on a modestly blocked, but incredibly long sequence. This single-take is not for empty show either—while not flashy, it does perform admirable work in accentuating the story, as the long, slow push of the camera pulls audience focus towards Officer Arnaud, metaphorically drawing us deeper into the character’s strange mental state as he progressively unravels.

In this competition between craft and entertainment however, Arnaud’s unravelling is sublimely bizarre and wonderful to watch. Thunder Road shares a certain indefinability that I think is common amongst great shorts, a slipperiness to classification that allows it to fluidly shift between genres in a way that can be exhausting in a feature. In a certain light, Thunder Road is a heart-string tugging tragedy of naked grief on display, and Arnaud’s inability to express it is pitiable. In another light it is purely, and uproariously funny, and, having seen the film with audiences on multiple occasions, I’ve noticed viewers are often confused in which direction to err.  I see it squarely as comedy personally, and while not as cringe-worthy as a Gervais-style British comedy like The Office, the film is, in my mind, a good match for the sensibilities of the American TV version of that show and its creator Mike Schur—combining big humor with big heart, its cringing aspects softened through empathy and warmth.

The common element that brings the technical and the storytelling sides together is Jim Cummings. Thunder Road’s  writer/director/actor/everything is at the center of the film, taking up nearly every frame, and his performance is revelatory. Via a 12min monologue, Arnaud is instantly understandable and charismatic. More so than the impressive range that his character arc takes through the film, I find innumerable details to the performance fascinating, knowing that every subtle pause, look, and stutter, was choreographed via a month of 45min car commutes that served as the stage for Cummings’ writing and rehearsal. Short films are often sunk by lackluster acting, but it is rare to see a work elevated by a great performance, and it is especially odd in Cummings’ case, as, while notable for the work he’s done as a producer in Ornana, and for directors like Patrick Wang, his acting resumé is quite thin.

Hopefully we’ll see Cummings in front and behind the camera more in the future. Off the strength of Thunder Road he signed to WME, and, thanks to being in the same shorts program at Sundance as Jason Reitman, the Up in the Air director offered a small role in Season 2 of Casual. Fullscreen has signed up for 6 new shorts from Cummings, which will all adopt the single-short format of Thunder Road, and those are expected to land online in September. On top of all that, a new independent film, Us Funny, was successfully Kickstarted just this month. Things are happening fast for Cummings at the moment, and audiences everywhere should be excited by that prospect!