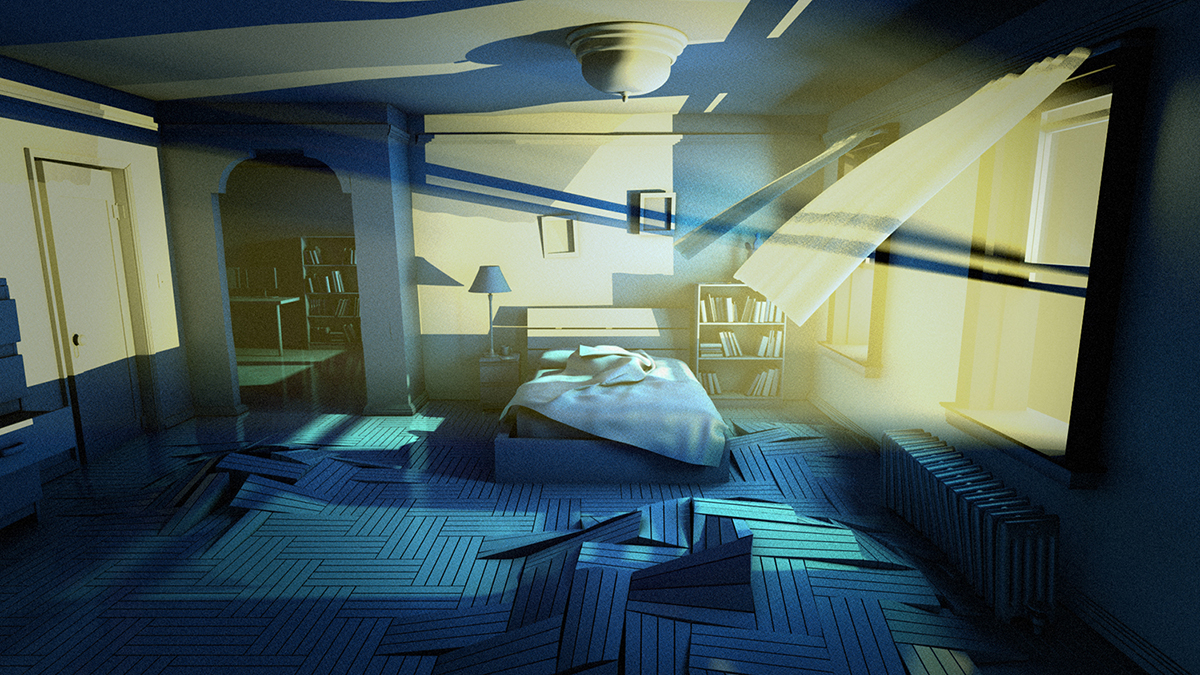 Grab your headphones and prepare to be entranced by Slow Wave, a 3-minute experimental animation about sleep disturbances and its effect on the mind and body. Creator, Andy Kennedy constructs an entirely visceral experience of slumber with his atmospheric sound design and disorienting animation style. Immediately, you’re thrust into a small bedroom at nighttime. At what appears to be car headlights passing along the far wall, sound pans across, creating a realistic sensory experience.  From that moment on, the bedroom begins to collapse and roll like a ship over waves that get progressively more rough.

Kennedy’s use of abstract, geometric shapes deconstructs the world he has created in an impressive way, akin to a Cubist Picasso painting. His color use is also poignant in that he uses red to signify disturbance, again like a painter. This red menace seems to have a personality of its own like the shapes and sounds that grow out of the walls and floor. The sound design itself is chock-full of recognizable things, but overlaid into a melodic soundtrack which adds to the uncannily dark atmosphere. While many experimental shorts struggle to convey concept or reason, Slow Wave manages to conquer both with visual and audio landscapes.

Profoundly, control is a central theme to this short. It begs the question of whether or not we forfeit complete control while we sleep—a fear many people can relate to. What happens inside our minds when outside forces affect our subconsciousness? Is there also a physical reaction? Kennedy addresses these notions in the second act of his film, which admittedly feels more like a completely separate project. The change in narrative is jarring, but the shift in perspective shows off quite a bit of inventive animation. Honestly, I wish that Kennedy hadn’t taken us out of the first room, but I enjoyed getting into the character’s headspace.

Kennedy explains his inspiration for this project: “The idea for Slow Wave began while I was living in a very noisy apartment in Brooklyn. The bass from my downstairs neighbors had a very disruptive effect on my life and work. I wanted to visualize how sound can change the experience of being in a space. I also have night terrors on a regular basis, often times based on irregularities in light or sound. I wanted to capture the visceral and abstract nature of both these experiences and weave them together into a single film.”

Ironically, the title ‘Slow Wave’ alludes to ‘Slow Wave Sleep’ – a state of deep, usually dreamless sleep. Clearly, Kennedy’s imagination got the better of him and we’re glad it did.

Andy Kennedy is currently exploring how to create spaces for visual reality, adapting Maya animation into Unity. Judging by this short film, we have high hopes!