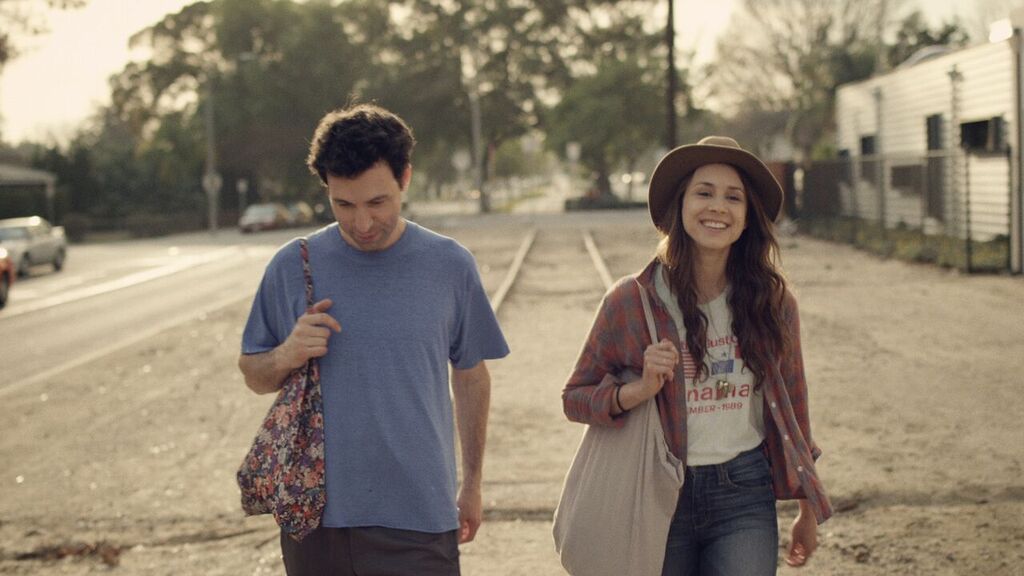 While the whimsical meet-cute has become an all too familiar short film trope, it is much less common for the filmmaker to place us at the sour, recriminatory end of the story. In Jacob Chase’s Amy, he does just that. The relationship has played out long before we encounter the characters, and we are left to glean what we can about its nature through the clumsy interactions and barbed comments of these two individuals, once intimate, now emotionally bruised and guarded, undoubtedly with lingering feelings of fondness, but perhaps also with darker motivations.

When exes Saddler (Alex Karpovsky) and Amy (Troian Bellisario) run into each other in their Los Angeles neighborhood, they spar back and forth, the power dynamic shifting subtly between the two, leaving the viewer unsure where their allegiances should lie.  Certainly, neither party is blameless – Saddler is patronizing and superior, but Amy used to make callous jokes about his weight.  As we learn more about their back story, morally ambiguous details emerge, and we realize that there is more to this scenario than a seemingly chance encounter between a pair of former lovers.

Shot in just two days, Jacob Chase wanted to revisit his days of filmmaking in high school, making a short with “as little of a footprint as possible.” With a strong script, a couple of stellar actors and carefully selected, shoot-ready locations, he was able to produce a two-hander that feels both sophisticated and spontaneous. Karpovsky’s Saddler is a deft concoction of self pity, cockiness and malice – with just enough vulnerability to keep us, and Amy, feeling a tiny bit sorry for him. Bellisario’s Amy is equally hard to pin down –  her seemingly sweet, quirky demeanor belies something steelier.

A man of many and diverse talents, Chase has been successfully straddling the independent and commercial worlds. He recently finished writing a film for The Jim Henson Company and Cirque du Soleil. He is also one of the three finalists in the Crash the Super Bowl contest, so vote here for his commercial and you could see it aired during this year’s Super Bowl! Whether it be commercial work or more personal projects like Amy, we  look forward to seeing more from this smart, emotionally intelligent filmmaker in the near future.