Each night in Silicon Valley, the Line 22 transforms from a public bus into an unofficial shelter for the homeless. This film captures one dramatic night on the Hotel 22 bus.
READ REVIEW
Next Previous 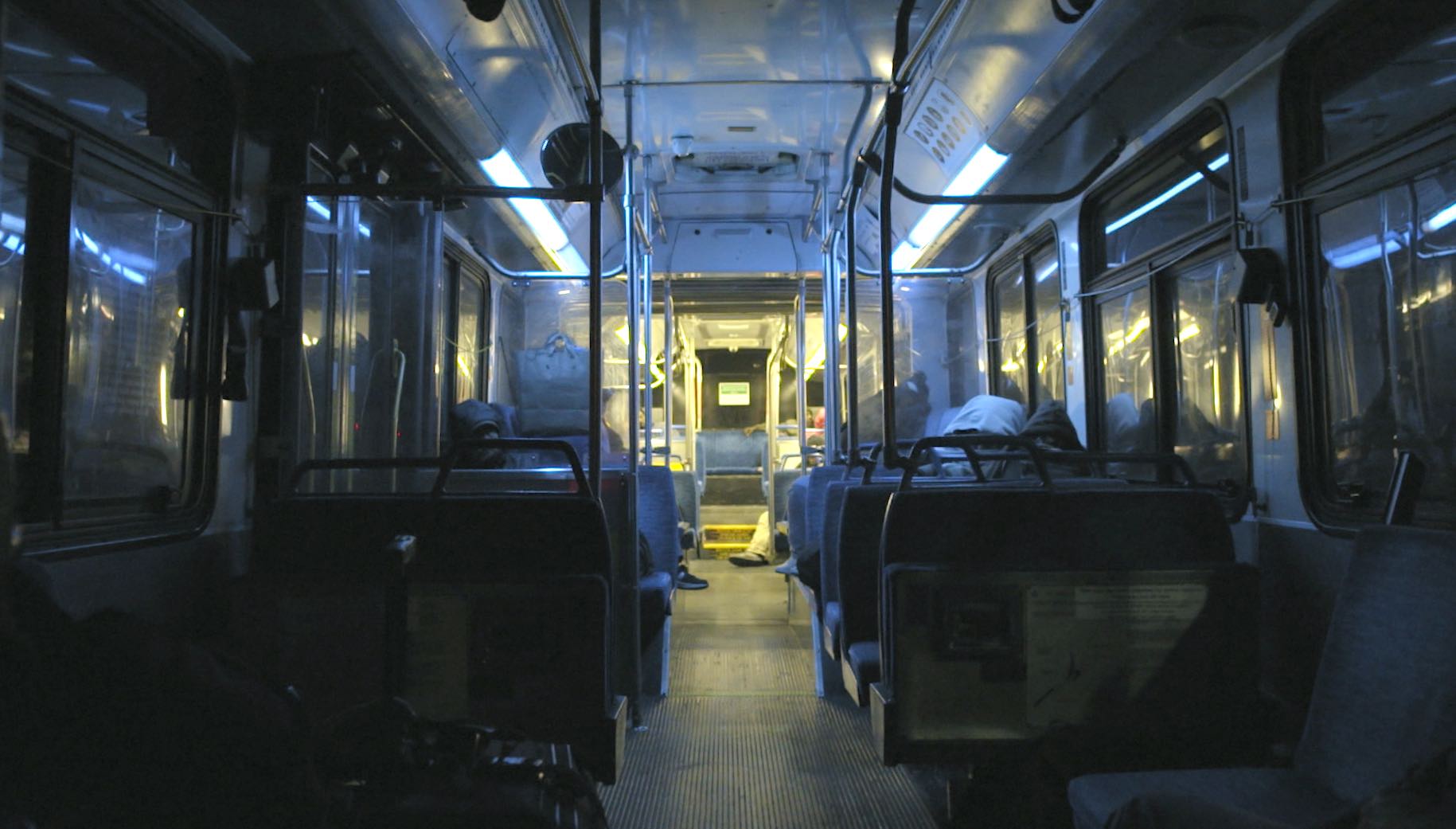 Jason Sondhi
Today it is a distinct pleasure to present to you Hotel 22, a remarkable short documentary from MFA student Elizabeth Lo which, more than any other short doc this year, has achieved not only artistic acclaim, but has broken through into mainstream consciousness via the strength of its simple, humanistic observation.
As a student at nearby Stanford University, Lo seized upon local news stories of “Hotel 22”, a late night bus in the California Bay Area that served as an impromptu late night shelter for the area’s underserved homeless, and decided to turn her camera on the phenomena. This film is the result, and reception has been extraordinary: it debuted at Sundance 2015 where it was picked up by the NyTimes’ prestigious Op/Docs programming strand, and won Lo a spot in both this years Saatchi & Saatchi New Director Showcase and Filmmaker Magazine’s famous “25 New Faces of Film“.
The appeal of the film is twofold: first is a matter of expectation and execution. Documentary in the short form has increasingly been dominated by simplistic profiles of quirky characters, as well as strident issue-based advocacy films for several years. Some of these films are excellent, but for this reviewer the monotony is exhausting. Lo’s subdued camera and detached, verité approach, accentuated by exquisite sound design, goes against the flow of recent short doc output and serves as a breath of fresh air.
The film is uniquely beautiful however as well, especially considering the challenging conditions of the shoot. Lo rode the bus for several weeks before shooting to embed herself in the scene and let its ridership get to know her and the project. This comfort level of the subjects is key to the film’s naturalism, but the decisions Lo makes with he camera are not objective. The frequent closeups of sleeping riders and weathered hands betray a sensitive compassion.  The shoot itself took place over 6 days and was condensed in the edit to feel like only one night. All in all Lo took 30 hours of footage, using a Sony F5 with fast Zeiss Primes in order to get proper exposure in the dark, found light environment.
The second, and equally important contributor to the doc’s praise however is simply the subject, and how it implicitly intersects with the USA’s obsession with, and lionization of, the tech industry centered in the area. The presence of such disruptive wealth amassing in such a short period of time has played havoc with regional economics, and the subtext of the film’s focus on the poor is the culture divide tech it is engendering.
Should we blame the Googles and Facebooks of the world though? Ordinarily you may say it is not their responsibility to care, despite how their success is reshaping these local communities. However the blatant hypocrisy of their own stances and statements can be used against them. Silicon Valley is not simply a sector of business after all, to many of its leaders it is a movement with no lesser purpose than to change the world. This lofty, if sometimes dubious, attitude is well represented in this New Yorker article which is a particular favorite of mine. Yet how can we take those goals seriously when this exists in their backyard? When reading coverage of San Francisco’s “startup bus craze” in March, I couldn’t help but reflect on the irony.
Fortunately Lo’s work and publicity it has engendered has slowly begun to make a difference. The film is increasingly being played in policy circles and was recently featured at a San Jose conference addressing housing issues. If you’d like to learn more, follow the film’s Facebook, and of course share the film.
Filmmaker Website
LIKE TWEET