Aquaphobia: a persistent and abnormal fear of water.
READ REVIEW
Next Previous 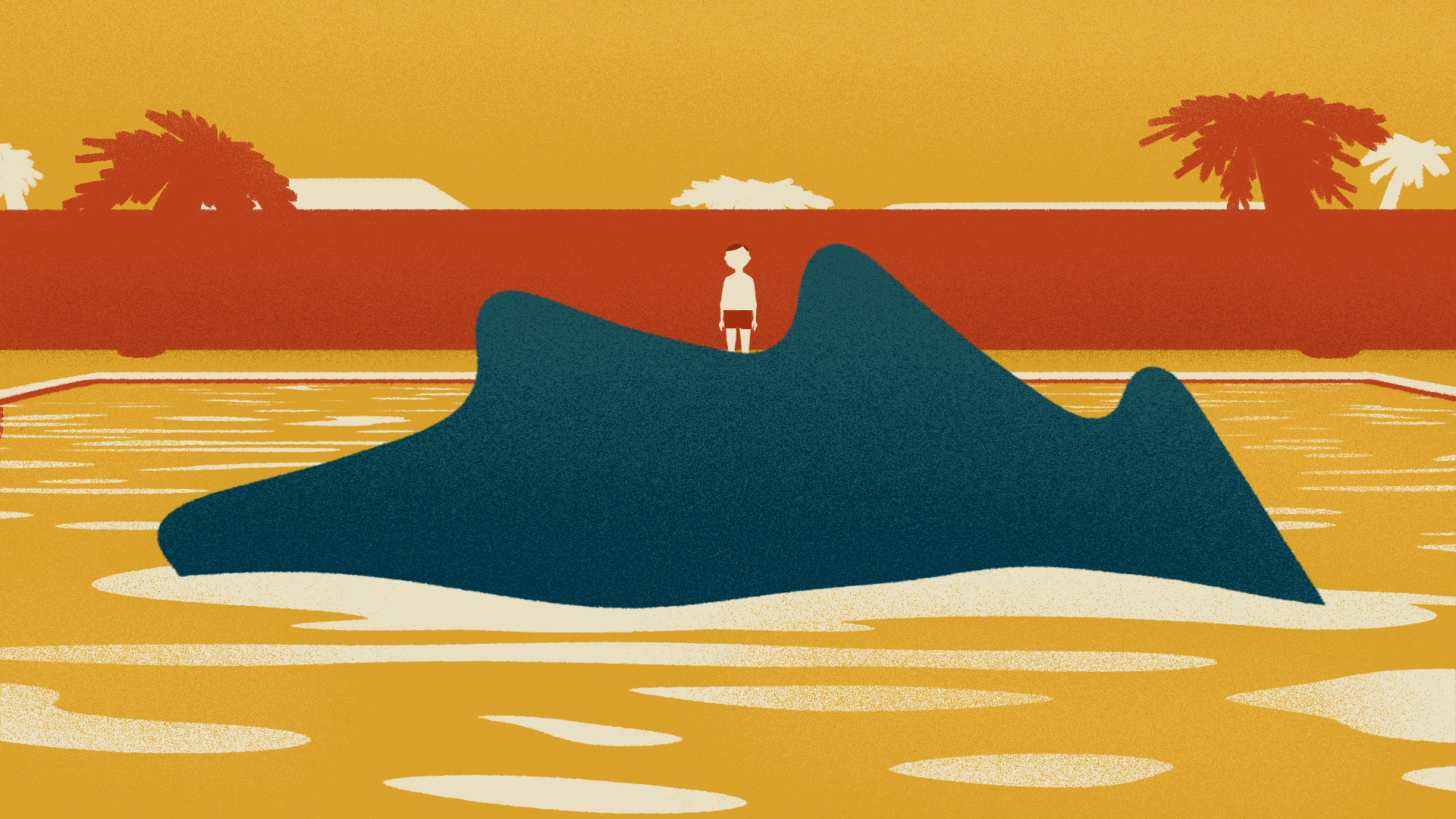 With a central theme of change at the heart of its narrative, Nathan Campbell’s concise short Aqua Profonda is based around the director’s own childhood experiences of relocating from Western Australia to Melbourne. With the story taking shape when the director started to compare the real and imaginary parts of memories based around his fears of water, what we’re presented it with is a short of impressive design and a surprisingly immersive plot. Originally recording these experiences in the form of a prose short story, the filmmaker admits (in an email conversation with Short of the Week) that he felt compelled to create an animated version “where the combination of the mundane and surreal can be presented in an innocent or matter-of fact way that compliments the feel of the story”.

At 95-seconds long, you’d be forgiven for expecting Aqua Profonda to simply be a case of style over content, but Campbell’s well-considered delivery of his fragmented narrative ensures this is never the case. Crediting “years of mulling over the experiences” for helping him condense his memories to the strongest parts, Campbell’s film is as much about tone and perspective, as it is about a young boy’s fear of the water. “Since the film deals with early childhood, the notion of a disjointed narrative was always going to be important to the tone of the film, the filmmaker reveals. “Each moment of the story needed to feel like the distillation of experience into a series of vignettes with little connective tissue between them. So elements of the plot like the plane trip from the west to east coast are presented in a way that suggests an important life shift, but are addressed fleetingly to leave a sense of ambiguity. The short run-time was almost a necessity for this reason, as too much explanation might have detracted from the feeling of awe and confusion I was trying to create. Similarly, the idea of a fluid sense of time that stretches and contracts from one second to the next (like the frog jumping as a transition into the second scene) was important to staying in the young character’s perspective. Feeling a certain moment intensely, and then losing track of the entire next month of your life is such an inherent feeling of youth, but also a core concept of film editing, which I hope have met in a happy medium here.”

Completed in 2-months of “after-hours and weekend work”, using a combination of Premiere, Photoshop, After Effects, Maya & Logic in the production process, Aqua Profonda is a film of strong design, with a particularly striking colour palette. Dialogue-free, this is a short that focuses on its visual elements to present its audience with an engaging narrative. “As a motion designer by trade I try to think about efficient visual communication a lot”, Campbell admits when quizzed about his filmmaking approach, “using a bold colour palette helped in making the compositions dynamic and easier to read, but went even further than that in distinguishing separate time periods and emotions. Making the choice to skim over certain connecting elements of the plot meant that colour would be needed to play a role in differentiating location and time, even if it was on a subconscious level for the audience. For example the hot yellow and reds of the flashback sequence work in tandem with the sound design to draw a chronological and geographic distinction from the film’s rainy beginning. By using heavily saturated and contrasting colours in this way I’m trying to represent the feeling more than the reality of different stages of growing up, but also the notion of bringing some elements along as emotional baggage, as seen in the hot orange color of the frog intruding into the muted blues of the opening swimming pool, becoming a connecting element between two totally disparate environments.”

Spending his days working as a motion designer at San Franciscan digital agency First Person, Campbell plans to continue working on these “smaller, atmospheric videos” as a way of experimenting with different approaches to his films. If you like the look of the filmmaker’s work and enjoyed Aqua Profonda, be sure to check out the trailer for his next short film True Love.