A father and son travel deep into the woods to make an offering to a mysterious force, but soon realize a key element is missing.
READ REVIEW
Next Previous 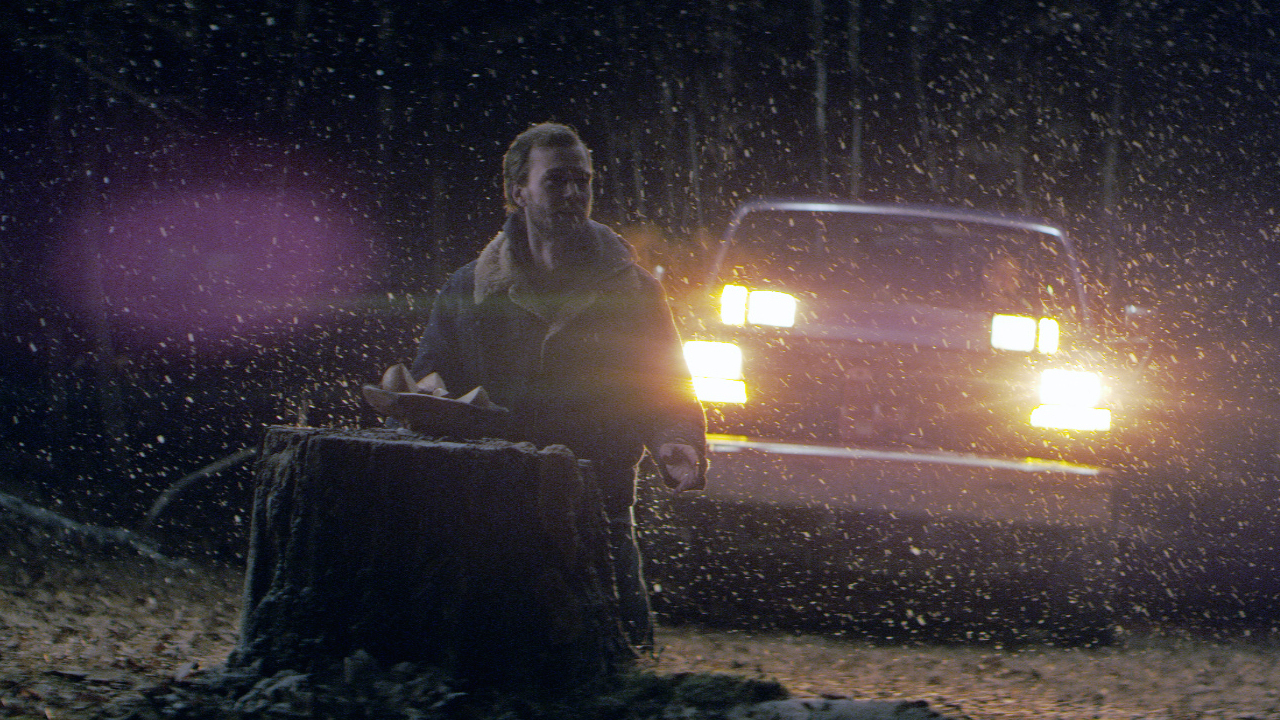 In the dark of the night, a lonesome pickup truck races along an old country road, windshield wipers smearing away snowflakes from the foggy glass. Inside are two men are on a mission which will soon become apparent. The determined driver, Isaac, glances over to the passenger seat: his father, Abraham, seems on-edge. “Hey, relax,” Isaac says. “It always happens this way, remember?” Abraham looks at his son and replies, “It’s not exactly something you forget.” Then Abraham checks the dashboard clock: 11:56. “That’s it,” he says, and starts to prepare a cornucopia of items on his lap; a melon, a feather, a bird’s talon, some berries — an offering, for someone or something. But all is not right. They’ve forgotten a crucial element…

To give away any more would be spoiling all the fun from Director Ryan Patch’s The Offering, a slick and tense old-school tale of horror making it’s online debut today with Short of the Week.

If the story (and character names) sound familiar, you’ve probably read the source material used for inspiration. “[Writer] Michael Koehler started out with the desire to explore the Abraham-Isaac story, which is obviously a pretty important narrative in the Jewish, Christian, and Muslim traditions,” Patch said. “From there, it sort of took on a life of it’s own, so we don’t really like to talk about it being an “allusion to” or “based on” the biblical story because we hope that it’s unique — but there’s no denying that it started there.” Along with the Biblical influence, Patch also drew inspiration for the film from a trip he took to India. “Seeing the way that Hindus worship gods really fascinated me,” he said, “and I wanted to explore more about how — as humans — we “offer” things in the hope of receiving something back.  This could be in a religious context, as I saw very specifically acted out in India, or in a more secular context — like the way that I “sacrifice” my time in the hope of receiving professional success back.  I think that sometimes we can get in cycles where, in the end, we sacrifice too much to these forces in our lives, and so The Offering was meant to explore what might bring someone to that point.”

Patch and Co. shot for two-and-a-half days on the RED Epic, making the most out of a self-proclaimed “shoe-string” budget. “Our poor DP, Andrew Ellis, did an excellent job lighting the forest on a tiny budget, but getting to the point where the set looked good took an extraordinary amount of time,” Patch said. The crew also faced challenges when it came time for night-time driving shots: “We wanted a handheld aesthetic, so we couldn’t use mounts, but we didn’t have the resources for a process trailer. ‘Poor man’s process’ was not an option because there were no street lights outside the car to use to sell the movement gag.  Added onto this was that we were filming on a hilly, bumpy, mountain dirt road at night and you have a very difficult situation. We went back and forth between about five ideas, and eventually settled on shooting the wide shot while moving on a mount, and the CUs on green screen.”

The Offering serves as the perfect primer for a feature-length horror film, a “cold open”, if you will, that teases the audience with what’s to come before the opening credits roll and the “real” movie starts (e.g., Drew Barrymore’s demise at the beginning of Scream). Patch and Co. deliver just the right amount of suspense, self-contained narrative, and un-mined backstory, which hints at a much richer cinematic world yet to be explored. And let’s not forget about that monster. Whether dictated by necessity (for budgetary reasons) or creativity, the choice to never show the “monster” is an inspired one. Crafting the creature out of sound effects and keeping it offscreen helps to build the tension (because, as Spielberg and McTiernan proved with Jaws and Predator, respectively, “monsters” become more terrifying and believable — to a certain extent — the longer they’re left in the “dark”).