After a devastating breakup, a young girl goes on a quest to find her spirit animal.
READ REVIEW
Next Previous 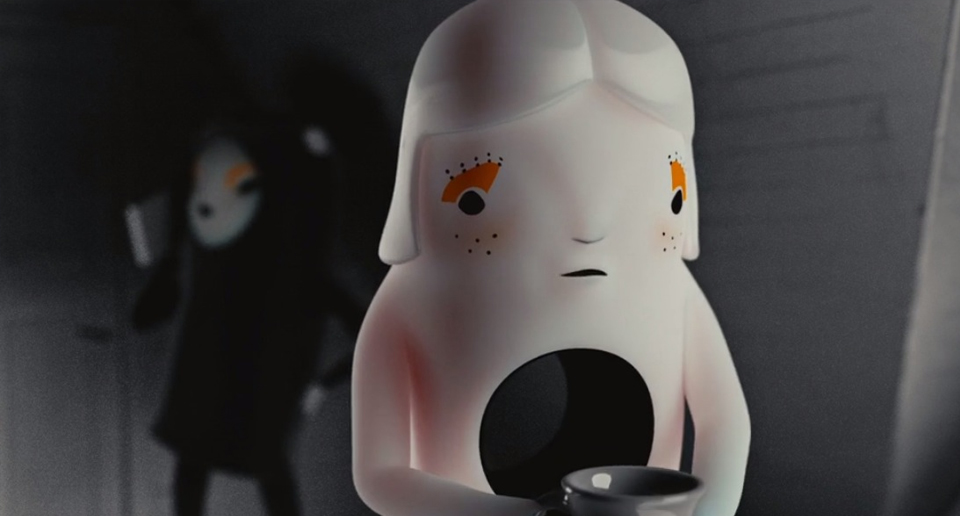 Made in Blender, Whole is a truly stunning piece of artistry and is itself a technical and aesthetic achievement. Filled with brilliant colors, the design, execution, and the attention to detail paid to the lighting and textures is chillingly beautiful. Visually, it is a perfect balance of the new, mixed with slight traces and references to Native American folklore. Whole touches on friendship, loneliness, betrayal, and overall the importance of the self.

Mira, a young girl, is devastated after a breakup with Michael and as a result feels both physically and emotionally empty. A gaping hole in the center of her stomach signifies that emptiness. Mira mopes around in her house desperate for Michael’s return when she is surprised with a visit from her friend Ingeborg. Ingeborg, determined to cure Mira of her depression, coerces Mira to get drunk and go out to a party. While roaming the streets the two girls hear thunderous bass drum and see vibrant neon flashing lights coming from a house. Upon entering they quickly discover it’s not a party, but in fact the house of what can be easily described as a shaman. The shaman offers Mira tea and shows her the path to find her spirit animal.

The impact of the breakup has caused the very appropriately named Mira to be incapable of seeing herself and the others around her. Ingaborg convinces her that the vodka will cure her and clear her mind. There’s certainly some foreshadowing when Ingeborg says to Mira “You shouldn’t drink tea when you are feeling this bad.” When she drinks the herbal tea offered to her by the wonderfully obnoxious shaman she goes into a trance that not only allows her to see herself, but it also unclouds her mind, thus making her attune to events surrounding her. Where before she was under the impression Ingeborg was her friend, Mira later realizes she was no friend at all but in fact was the part of the problem. Oddly enough, the vodka bottle did wind up playing a part in revealing the true nature of Ingaborg.

In many ways the message and the narrative is familiar, but the visual style is so captivating it not only masks the familiarity but also reveals something new and more relevant. The notion that the hole in her stomach reflects the emptiness she feels inside is a fairly obvious connection, but the film manages to carry multiple levels of both visual and narrative complexity that allow it to be significantly more meaningful.

In the end, we feel as though we have ourselves gone on the journey to find the spirit animal with her, not only because we experience it narratively, but also because we feel as though we have in some ways directly participated in her discovery of the spirit world. The transition from the real world, through what is essentially a warp tunnel, is such a unique visual experience we feel as though we ourselves are going through it, equally as mesmerized as she is. What we’re left with is a slight and albeit childish desire to find our own spirit animal and the thought “I’ll have what she’s having.”