Hot off the success of Cars and Planes, a room full of executives dreams up the next big franchise... Boats
READ REVIEW
Next Previous 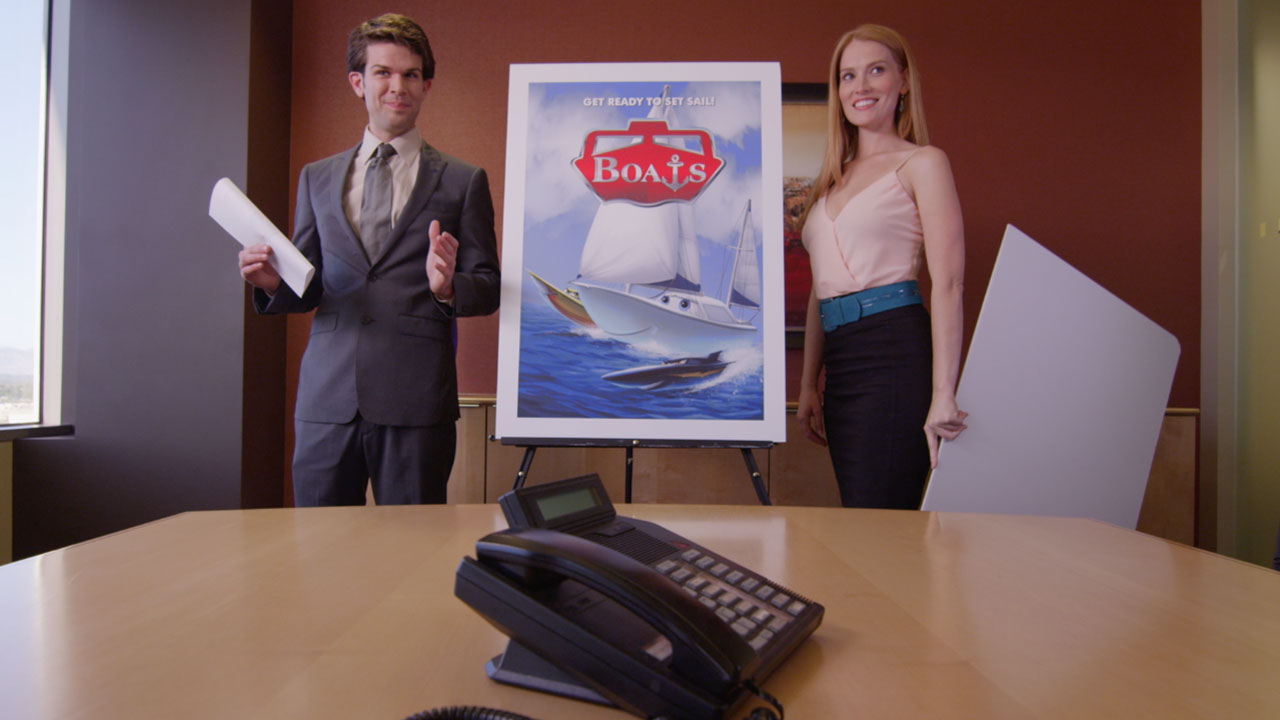 Taking a cutting look at the increasing popularity of the Hollywood franchise, Justin Dec’s Boats transports us into an executive meeting where the “decision-makers” are discussing their next money-making blockbuster. Focusing on product placement, hip hop theme songs and merchandising instead of story, Dec’s fictional band of corporate brothers take us on a journey of creation as they develop their latest low-risk venture.

Whilst Dec’s comedic short is obviously his exaggerated vision of how these meetings take place, the message is one echoed by most film fans worried about the current lack of investment in original storytelling from the movie industry. Eager to discover where the concept for Boats came from, Short of the Week spoke to the writer/director about his satirical narrative and his concern for the industry his loves:

“For people who don’t live in Los Angeles, try to picture a city where everywhere you look you see movie billboards. They’re literally everywhere. Personally, I love it but I’m a movie fanatic. So a few months before I made Boats, everywhere I looked, I saw Planes. I couldn’t get away from it. My friends felt the same way. In fact, everyone I know was like, “Come on. Planes. Really? What’s next? Furniture?” Since they had already done Cars and now Planes, I figured the next natural step (besides the obvious sequels. Planes 2 anybody?) is to take to the seas with Boats. That’s how it started. When I sat down to write it, I knew I wanted to see a meeting where no one was interested in the story. They would just be talking about the brand and ways to make more money. I also knew I wanted one guy in the room to be the naive idealist, sort of the voice of reason begging them to shut down the franchise monster and just focus on making one good movie at a time. Once I figured out the rest of the characters and their relationships with one another, it sort of wrote itself.”

“I feel like there’s this unsaid collective agreement that the public is fed up with the franchise and reboot machine.”

“Yes, they make money, but it’s only because there’s no other options and people want to go to the movies. They always will. It’s escapism at it’s best. So I feel like the box office returns are guiding the decision makers in the wrong direction and the elements that I love about cinema are being lost in the process.”

Although the delivery may be very different, the message of Dec’s Boats shares a lot of the same concerns we voiced in our Has Hollywood Lost its Way article we published on Short of the Week back in 2012. The popularity of the franchise or sequel movie shows no signs of decreasing anytime soon, one look at the top grossing feature films of 2013 and the likes of The Hunger Games: Catching Fire and Iron Man 3 sitting proudly at the top will confirm this. Lovers of original storytelling shouldn’t worry too much though, whilst the blockbuster feature business will continue to make low-risk ventures, you can always rely on the short film arena to provide you with your dose of innovative and refreshing narratives.

Unfortunately, it seems like Dec has had enough of making short films for now though, with his focus now aimed at making something of a longer duration, he’s set his sights on his next project breaking into the feature market:

“Boats was my seventh and last short. After I got it in the can, I made the decision that it’s a “feature or bust”. No more shorts. I’ve written four screenplays in the last three years. Two are comedy and two are sci-fi. I like writing big laughs or big ideas. So I’m currently navigating the world of independent film finance and working on getting one of these scripts traction.”