Bill is fifty-two years old, has a mountain man beard, and delivers pizza on a fixed-gear bike in Brooklyn.
READ REVIEW
Next Previous 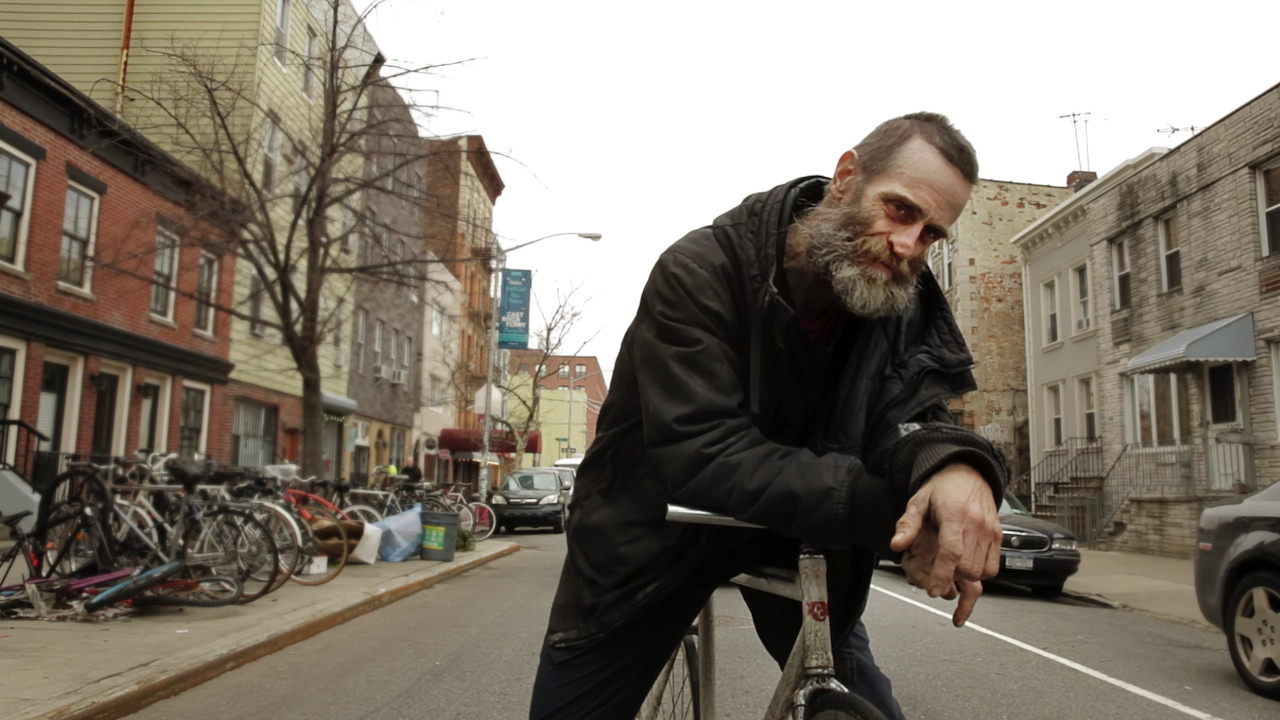 Documentary about Humanity in Live-Action
Directed By Michael Beach Nichols & Christopher K. Walker & Joshua Simpson
Produced By No Weather
Made In USA

Under the amber glow of streetlights, he pumps the pedals of a fixed-gear bicycle, weaving in-and-out of the New York City traffic. His right hand white-knuckles the handlebar while his left precariously balances a red pizza warmer — a real-life Premium Rush-er. “They don’t call me ‘wild’ for nothing,” he says. The man is Bill, a fifty-two-year-old delivery man for Best Pizza in Brooklyn, and he’s the subject of No Weather‘s latest documentary short, simply titled Delivery.

“If you look at me, you are definitely rolling the dice. It is a fifty-fifty chance that you’re gonna get me or I’m gonna fucking kill you.”

If forced to describe the stereotypical pizza delivery person, odds are you’d land on a lazy-looking high school student, driving a barely-hanging-in-there jalopy and arriving five minutes late to your door, only to gripe about the measly tip (I know, because I used to be one). Bill is anything but stereotypical. He rides with aggression, sporting a grizzly mountain man beard and a Ben & Jerry’s toboggan, putting his life on the line everyday to carry fresh pies around the Brooklyn borough to hungry New Yorkers. “Half of the drivers genuinely don’t see me, ” Bill says. “The other half are trying to get me.” And while he’s technically homeless (he bounces around on friends’ couches), this resident bad-ass seems right at home on his silver fixie. “The day I can no longer ride a bike,” Bill says, “better be the day I’m fucking dead.”

Co-director Joshua Simpson conceived the original concept for Delivery. “The idea was to find an interesting person who delivers food in New York City,” co-director Michael Beach Nichols said, “and then develop a webseries around that concept, focusing on a different delivery person per episode.” For their pilot, they settled on the Big Apple’s iconic thin-crust pie. “We decided pizza could be the first episode, so Joshua and I just started going to pizza restaurants around Williamsburg and Bushwick. We probably went to fifteen places before we stumbled on Bill. When we went up to the counter to tell the manager about our project, he just smiled and said, ‘You’re looking for Bill’. And there he was, with that glorious beard and infectious smile.”

Because short profile pieces like this have become so commonplace, it takes a truly unique subject to rise above the pack — and boy, did the crew at No Weather find that unique character in “Wild” Bill. “I remember as a little kid,” Bill says, “being in the car with my mom and seeing a bike messenger ride by in San Francisco. I said, ‘Wow, look at that!’ My mom said, ‘Billy, don’t you ever do that.” Like many kids who have come before him, Bill ignored his mother’s wishes. After working in San Francisco for several years, Bill moved to New York and soon found his niche, working as a bike messenger before settling into his current gig at Best Pizza. Some days, he makes good money. Other days, the risk doesn’t equal the reward; he’s been jumped — numerous times — by thugs looking to steal his deliverables, but somehow Bill keeps going. He’s even become so popular at Best Pizza that customers request him specifically. And if you think the hijinks of Premium Rush were a little far-fetched, think again. “I’ve delivered a million-dollar package more than once,” Bill admits, but he treated it the same way he would a Best Pizza-pie. “We used to deliver millions in bonds and checks. We didn’t get paid anything more. It was a regular fucking messenger job.”

When the team at No Weather approached Bill about the possibility of doing a piece about him, he was surprisingly cooperative. “We told him the idea,” Nichols said, “and he was totally game, on one condition: he wouldn’t slow down or alter his work day in any way. So we’d have to keep up.”

And keep up they do. Whether filming over his shoulder (a la the way Aronofsky follows Mickey Rourke in the opening minutes of The Wrestler) or shooting out the back of a car, No Weather captures Bill in his element, filming over the course of four days with a Canon 5D MK III, a 5D MK II, and a GoPro Hero3. No Weather shoots Bill from just about every angle imaginable (without the aid of CG), and it comes as no surprise that capturing the delivery man was the most difficult part of the process for the team, one that required tons of creativity and ingenuity. “He was quick,” Nichols said, “and he went the wrong way down one-way streets. Our friends Joe Duva and Luke Lobato shot the GoPro footage of Bill from bikes, so they’d follow him and try their best to keep up. As for following Bill in the car, that was incredibly tricky; as Bill left for a delivery, we’d ask him what route he was going to take. He’d tell us, and Josh would drive my car while I shot from the trunk of the hatchback. It probably wasn’t totally street-legal, and I’d get kind of carsick, but we are really excited about the quality of the footage that we got.”

The (literal) blood, sweat, and tears pays off in heaps. As a viewer, we get to hear Bill in his natural habitat. Instead of forcing him to do a talking-head style interview (with b-roll stacked on top to cover soundbytes) No Weather rides along beside — and in front of and behind — Bill and keeps the mic rolling. Filming this way allows Bill to tell his own story while cruising along an avenue or parked briefly at a stop-light, a creative decision on No Weather’s part that makes for an incredibly authentic and intimate viewing experience.

When the guys at No Weather aren’t editing their  new feature documentary, they’re developing new episodes to follow up on Delivery. Make sure to keep tabs on all of their projects via their website or Facebook page.