A new couple are about to get romantic when they are interrupted by the guy's future self.
READ REVIEW
Next Previous 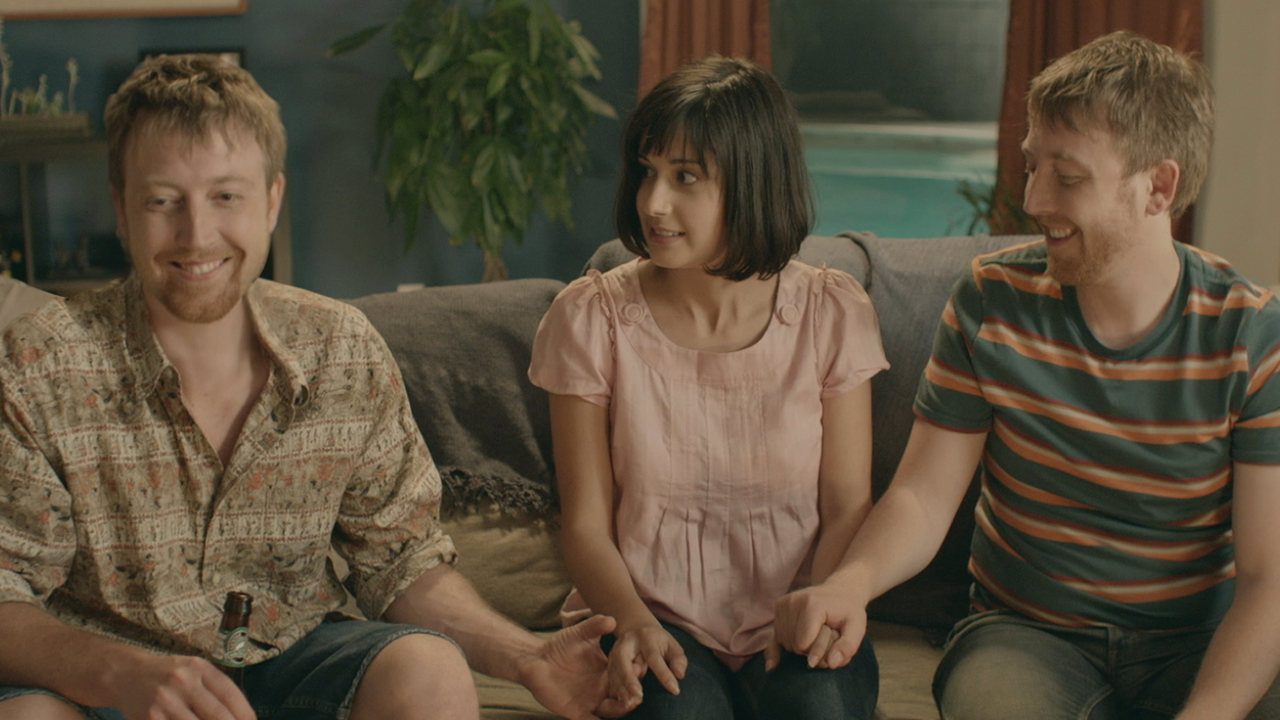 For centuries, storytellers have leaned on time travel as a dramatic device — and for good reason; it’s the ultimate “What if?”. What if my mother fell in love with me and not my dad? What if I was forced to kill my future self? What if a hot tub could take me back to my high school glory days? I know, I know, you think you’ve seen everything time travel stories have to offer. But Director Bo Mirosseni and Writer/Actor Elisha Yaffe beg to differ. In their latest short, Time Travel Lover, Mirosseni and Yaffe craft a hilarious sci-fi comedy that’s heavy on the laughs and (wisely) light on the technical mumbo-jumbo.

Matt (Yaffe) and Hannah (Stephanie Hunt) barrel into an apartment, lips locked, hands fumbling with one another’s jackets. Giddy with anticipation, they collapse onto the couch. We’ve seen this played out before: he takes off her coat, she takes off his bike helmet — and then the bedside alarm clock starts to beep, the digital numbers morphing between 10:53 and 10:59. Before Matt can shut off the alarm, the living room lights up, and there, standing before the (once-happy) couple is a second Matt. Terrified, Matt and his date start to scream.

“Don’t panic,” the new Matt says. “I’m you three weeks in the future. It’s a long story, but time travel is invented tomorrow –”

“I am not talking to you!” Three-Week Matt retorts. As it turns out, Three-Week Matt hasn’t travelled back in time to save the human race (Terminator 2: Judgment Day) or even his family (Back to the Future, Donnie Darko). He doesn’t have lofty goals like that. He’s just pissed. “We have sex tonight, right?” he asks. “No,” the couple reply. “Well, it happened,” Three-Week Matt says, “and it was great, and then…radio silence. No calls, no texts. You weren’t even updating your Facebook status.”

“So wait, you just time-travelled back in time to give this speech right now?”

Smartly sidelining the head-scratching physics of time travel for a more farcical brand of comedy, Mirosseni and Yaffe offer up a science fiction romp that keeps piling on the absurd for its entire duration, ramping up the outrageous so much that you’re certain the filmmakers have backed themselves into a corner they can’t escape — but then escape they do, and brilliantly. Under less-confident direction (both creative and technical), the high-concept-meets-independent-film script could have turned into a sloppy mess, but Mirosseni crafts Time Travel Lover with assured precision. The jokes fly off at a rapid-fire pace, with each new Matt adding another layer of depth and humor — thanks in no-small-part to Yaffe’s talent as both a writer and performer. Armed with the difficult task of portraying multiple versions of the same character onscreen (often playing against himself), Yaffe magically pulls it off, breathing distinct life into each incarnation of Matt, whether they’re off their Zoloft or just angry that they didn’t get a response to a Facebook message. It also doesn’t hurt that Stephanie Hunt makes acting amidst a sea of absurdity look easy; her comedic timing is impeccable, her face the perfect blend of innocence and irony.

So where does such a fantastical idea for a film come from? “[Mirosseni] asked me if I had any interesting scripts to shoot,” Yaffe said. “I lied and told him I had a ton…With the aid of whiskey, I came up with a few but was hoping he would choose Time Travel Lover. Looking back, the others were so terrible he had no choice.” The two originally planned on funding the project themselves, but the “complex technical logistics” and “heavy post-production work” proved daunting. “I sent [the script] over to Partizan Films, the production company that represents me for commercials and music videos,” Mirosseni said. Luckily, Partizan loved the script and decided to fund the short, allowing Mirosseni and his (self-proclaimed) “weird friend” to shoot for three days in Los Angeles on the ARRI Alexa with a talented professional crew. Crafting the script for such an ambitious short was (understandably) a challenge. “The original script was about ten or so pages (“With fifteen Matts,” Mirosseni adds), but that just wasn’t feasible with the budget we had. We had a lot of fun brainstorming where these two characters had been in their relationship and the varying amount of bullshit they each had to put up with, but before it spiraled into a feature, we had to pump the brakes and figure out what would make the best possible short.

One of the biggest hurdles for the crew was believably employing a single actor for multiple roles (as I’m sure the producers and directors of Orphan Black can attest). “Eye lines were hard,” Mirosseni said. “We had stand-ins with name cards taped to their chest with things like “Matt in three months,” or “Matt in ten years” and we would place them in different parts of the room for blocking purposes. That way we knew exactly where the different Matts were in the scene and — if they crossed any of the other Matts — we had to be sure we would have plates and green screen footage of them to assist in the post process.”

Amidst myriad other projects, Mirosseni and Yaffe are developing a feature version of Time Travel Lover. In the meantime, Mirosseni will be busy directing in the music video and commercial world (although he can’t say their names yet). You can catch Yaffe on HBO’s The Newsroom and/or “Swap Meet”, a live comedy and music show he hosts in Los Angeles.