An over-worked father returns home to have an unsettling conversation with his son.
READ REVIEW
Next Previous 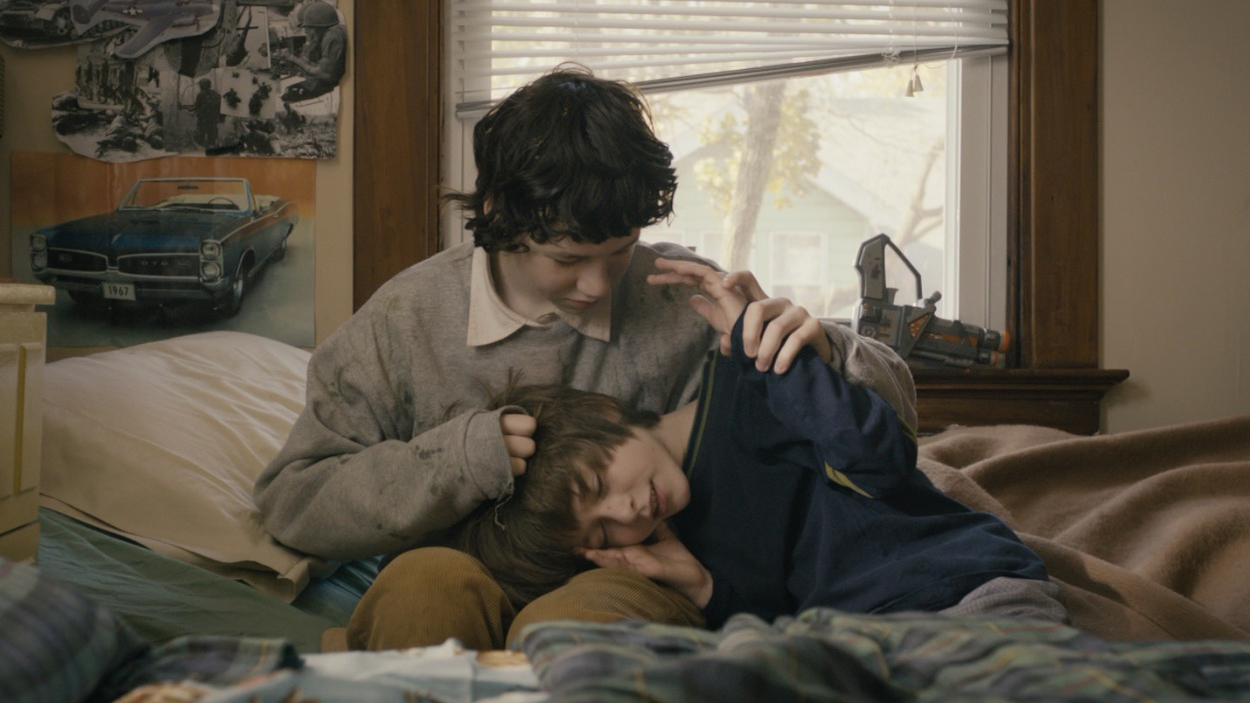 Within seconds, Disgrace captures your attention and sets the tone for the remainder of the film. Milo tortures his younger brother (Nick) as he states the first line in the film “say you like kissing boys.” Milo curses at his younger brother. His younger brother curses back. Milo chastises him with curses for cursing and in a sense sets an underlying theme of the entire film with the message of  ‘do as I say, not as I do.’

Milo is in the beginning stages of puberty and discovering his own sexuality. But this pivotal stage in his life is coupled with the pressures of  troubled and dismantling family. As a result, Milo’s unsettled upbringing is reflected in his unsettling sexual urges. His over-worked and sullen father discovers evidence of Milo’s sexual interest and initiates a highly intense discussion based on his findings, a discussion that, because of the unstable nature of Milo and his father, quickly spirals into an acute display of agonizing frustration and resentment.

In the midst of Milo and his brother’s heightened exchange, their father returns home from work only to be confronted outside by a foreclosure notice. When the father walks into the house, notice in hand, he sees Milo and his brother behaving suspiciously, and immediately sends his little brother to his room. The father, clearly unsettled, begins to have a conversation with Milo.

The film’s title Disgrace is exceedingly appropriate. There really isn’t a single character that doesn’t act disgracefully in one form or another. The two brothers initially torment one another, which is certainly something that can easily be seen as normal, but the manner in which it is presented in this film has greater significance. Milo’s general behavior toward his father during the initial part of their conversation comes across as disrespectful, certainly, but not quite yet disgraceful. When we realize the purpose of the talk and are shown the mutilated women as masturbatory imagery, we become naturally horrified and disappointed by our discovery, and thus horrified and disappointed in Milo. We become confused as to why or how Milo would learn to become interested in such imagery to satisfy his sexual urges. But we soon discover it is in part due to the violent behavior displayed by his father toward his mother. Milo regularly experiences this behavior, and in a sense starts to create an association between women, sexuality, and violence. His father slaps him, after which Milo then bursts out in a tormented rage, screaming profanity uncontrollably. His father then decides to wash his mouth out with soap, chasing Milo down in the street making their personal matter a public spectacle. At this point Milo has behaved disgracefully, his father has behaved disgracefully, and with their public display, their entire family has become a disgrace.

Director Casey Modderno is incredibly unique, and not just because of the challenging subject matter she’s chosen, but because she trusts and fully respects her audience. she doesn’t walk us through every detail in the script or flesh out every reference for the sake of understanding. She allows us to figure it out on our own. She doesn’t overtly spell out for us that the father is habitually violent, she insinuates it. She doesn’t force the images of mutilated women in our face for a long period of time. We see the image just long enough to identify it and register it. In doing so Modderno places emphasis on the conversation being had and the father and son relationship rather than placing emphasis on the impact of the imagery. This type of subtlety as a filmmaker seems rare when the general trend seems to be to have audiences sit with shocking imagery.

In many ways the film demonstrates an interesting aspect of a family dynamic. The family unit is so encompassing it creates a world unto itself almost impenetrable from the outside world. What happens inside a home, however dark, remains private. Within the sanctity of a home, the seclusion of the family remains intact. Nothing else seems to exist or matter. But when this microcosm steps outside of its boundaries, it enters into an entirely different realm with additional rules and consequences beyond control. Disgrace leaves us with the uncomfortable feeling that the escalated type of conversation had between Milo and his father will not be the last of its kind, and them crossing the physical boundary and bringing their private world into the public world only signifies a saddening and impending doom for their family.