Edmond Was a Donkey

Edmond is a small man whose life transforms when his co-workers crown him with paper donkey ears.
READ REVIEW
Next Previous

Edmond Was a Donkey 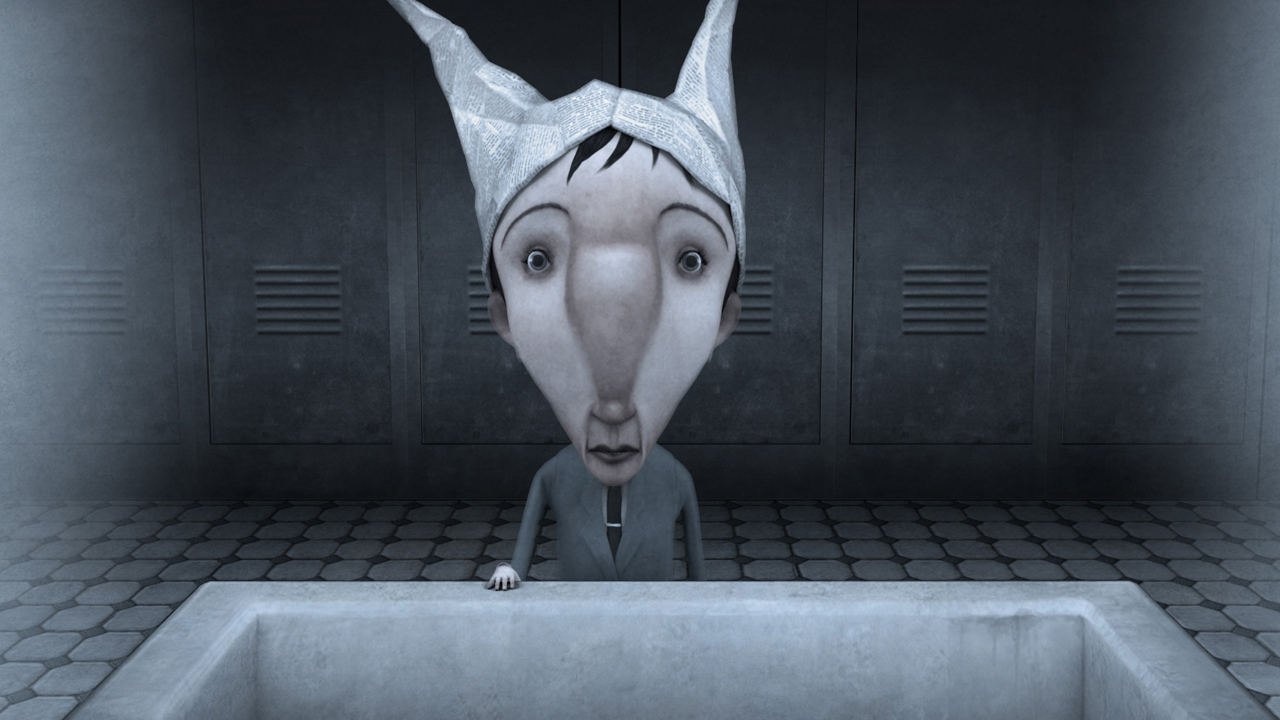 Edmond Was a Donkey is a fascinating tale of self-perception and self-discovery. The film itself is visually stunning with unique character design and an over all cool and dark color palette that is highly reflective of the metropolitan and industrialized landscape in which the film takes place.  In just 15 minutes filmmaker Franck Dion addresses a wide variety of topics relevant to the human condition revealing the transformative powers of something as simple as paper donkey ears.

Edmond is a small man about half the size of everyone else surrounding him. Every day Edmond goes to work and works diligently, only to be mocked, bullied, teased, and tormented because of his difference and size. Edmond ignores these taunts until one day his coworkers crown him with a paper donkey hat, forever changing his sense of self, and in a way, his sense of purpose.

We can’t help but make the correlation between Franck Dion’s Edmond Was a Donkey and Robert Bresson’s Au hasard Balthazar. Bresson’s donkey is incapable of having any feeling or judgement of what happens to him and, in fact, is completely incapable of even perceiving the cruelties that surround him and affect him. It is not necessarily that Bresson’s donkey is blind to these cruelties, but rather has transcended cruelty of reality and human nature. In Edmond Was a Donkey, Edmond, after being crowned a donkey as a prank, finds comfort and freedom in what the identity of the donkey represents. It is the identity of the donkey that allows him to transcend the coldness and the cruelty of the world in which he lives, allowing him to experience the world as a bright, colorful, and welcoming place. When he sees himself in the mirror for the first time wearing the donkey ears, everything becomes clear. His identity becomes clear. He is no longer a muddled figure that no one recognizes—least of all himself. The ears enable him to see himself for who he really is. The donkey is his savior.

Edmond Was a Donkey leaves us with an interesting sensation. It leaves us questioning why we are the way we are. Why we treat those who are different us the way we do. Why we bully. Why we feel the need to gossip. What it’s like not being accepted. What it’s like not being able to be who you are. The sorts of medical treatments we use on those we deem different. The oppressive nature of the metropolis. The freedom of the outdoors. The irony of caging an animal in an environment meant to mimic the great outdoors. Once we see Edmond and his liberated self, we can’t help but wonder what part we play in this narrative, both in this film, and in society, and in a sense, become aware of our own desire to seek out the same liberation Edmond finds through his ears.