A homeless teen describes his challenges and celebrates the triumph of his creative self.
READ REVIEW
Next Previous 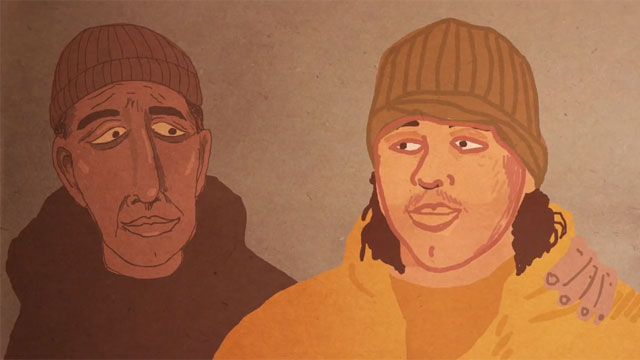 Created for the American Refugees series, a campaign produced as part of Seattle University’s Film & Family Homelessness Project, Drew Christie and Amy Enser’s The Beast Inside provides homeless teen Tilawn with a chance to tell his story and give an insight into how he deals with his situation. Bringing together Christie’s hand-drawn animation style with Enser’s extensive documentary experience, the directorial duo’s individual approaches blend together to create a certain roughness in production that perfectly befits the film’s topic.

“…Got a rough life, but it could be worse off. Honestly, I’m on the streets, constantly run into freaks. Set on fire, struck by lightning, liked it so much it became frightening.”

Introducing us to Tilawn, the focus of The Beast Inside, through one of his self-penned raps, we’re instantly engulfed in images of homelessness as the teenager reveals encounters with death, drugs and more in the opening bars of his rhyme. Quickly reverting to a more traditional documentary interview style, the hip-hop delivery might cease for the majority of the remaining duration of the short, but the revelations continue to come thick and fast. Tilawn is keen to ensure this isn’t just a story of hardship and struggle though, his glass half-full attitude shines through his interviews as he reveals how imaginary fights with dragons and altruistic acts of kindness helped him remain positive about his situation.

Whilst mixing animation aesthetics with documentary storytelling isn’t exactly breaking new ground, it seems like the perfect style to tell this particular narrative. Whereas a live-action version could have come across as bleak and downbeat, this particular delivery retains a modicum of positivity which lifts The Beast Inside out of the usual depressing haze you might expect to find enveloping a short tackling this particular subject. Raw in both style and tone, Christie and Enser’s film contains an honesty you like to find in documentary, one that feels insightful and entertaining in equal measures. Sure the subject and approach could be criticised and unravelled under closer scrutinisation, but like Tilawn says in his final rap “why do so many people just want to focus on our flaws?”