A fisherman returns to the dock to share the tale of his most epic fishing expedition with the boy waiting for him.
READ REVIEW
Next Previous 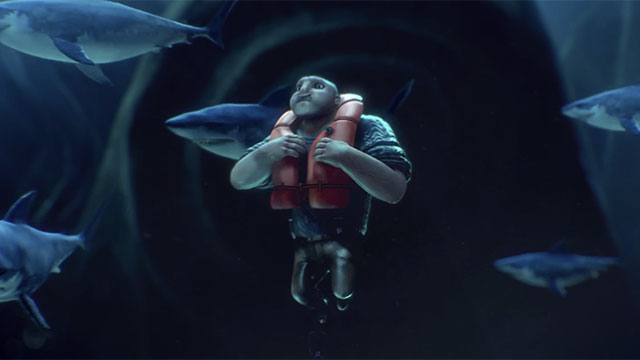 Created as their graduation film from Ecole supérieure des métiers artistiques in Montpellier, France, The Incredible Marrec is an animated short brimming with an adventurous narrative and some impressive computer generated animation. Immersing its viewers in the world of its seafaring protagonist and his over-active imagination, this entertaining animation takes us on a spectacular journey above and below the waves.

Returning home from another fishing trip almost empty handed, the story of this 6-minute short centres around seasoned mariner Marrec as he attempts to impress the young boy waiting at the dock, with tales of his embellished ocean adventures. Eager to entertain his excitable audience (and us excitable viewers), our fisherman’s ever-expanding yarn soon becomes the thing of legends, as our hero’s story swells to include shark fights, mystical underwater creatures and even the moon. Reminiscent of Tim Burton’s Big Fish in places, our protagonist tells his tall-tale with such enthusiasm that like in the aforementioned feature you’re left wondering how much of it he actually believes himself. “A man tells his stories so many times that he becomes the stories” is how Burton’s exaggerated yarn-spinner is described and that seems an apt description for Marrec as well – its never clear how much of his own story he believes, but its clear he relishes telling it.

Its been a while since we featured an ESMA animation on Short of the Week, but The Incredible Marrec includes everything that made us want to feature previous shorts from the school. Like Dum Spiro and Electroshock before it, this latest animation from the French institute impresses with some polished animation that goes above and beyond what you would expect from a graduation film, but it’s in the storytelling where this short really grabs hold. Wrapping us in the magical underwater universe the quintet of directors has created, the narrative of this spellbinding short transports you back to the world of bedtime stories you experienced as a child, leaving you with that feeling of visiting a world only ever possible in dreams.