In a suburban town near Montreal, a man spends a day with his sister's son, forcing him to confront some poignant sexual decisions of his past.
READ REVIEW
Next Previous 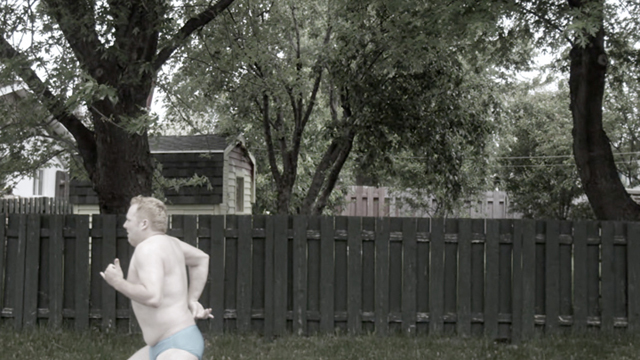 Benoit Lach kicks off his film ‘Avoidance’ with a punch. Sebastian, an almost entirely naked man runs out of a house as though he has witnessed an excruciatingly horrifying event. Immediately afterward we see Sebastian with an entirely altered and almost unrecognizable appearance. The well kept and groomed young man transforms into a slightly older slob, with an unkempt and careless appearance lying face down in a dark and grimy house. A loss of innocence is reflected in his physical transformation, but we’re uncertain as to why. His sister calls him from work asking him to pick up and babysit her son, instructing him to order pizza with money from the top drawer in her dresser. His questionable and depraved actions that follow accompanied by his constant look of disgust and self-loathing lead us toward a mutual but temporary loathing. Once we discover the root of his depravity, we not only have a greater understanding of his behaviors, but in some ways also absolve him of his unjustifiable rudeness seen earlier on in the film, but not of his greater sin.

The film is riddled with calculatedly subtle clues that softly guide the viewer toward the conclusion. Lach cautiously reveals only what needs to be revealed to maintain that constant sense of curiosity and unease. The question of morality is present throughout the film. We question the reasoning behind his behavior but also immediately judge him for his actions, and in particular, his attitude. In some ways the film begs to question our own morality, sense of compassion, understanding and to what end as we switch from one conclusion to the next. By the end of the film we truly wonder if the rudeness we saw earlier on was, in fact, warranted. We undoubtedly recognize the immorality of the actions leading up to the behaviors of the unkept version of himself, but we also recognize that so does he. He is entirely conflicted with two responsibilities, one being himself, and one being the result of the actions of his former self.

‘Avoidance’ possesses a unique quality of creating a suspended sensation of unrest in the manner in which it is narratively constructed. Even though, when we reach the film’s conclusion all of our questions are answered, we are still left with an appropriate and perpetuating feeling of uncertainty. We become comfortable that we finally understand why what happens, but become even more uncomfortable with what discover, leading us to wonder if we would have actually been better off not knowing.