In a deserted village in Japan, Ayano Tsukimi makes lifesized dolls to make up for those who have died or moved away.
READ REVIEW
Next Previous 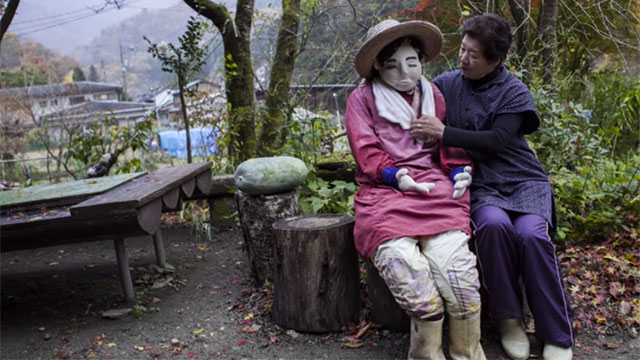 To avoid disappointment for those with a certain expectation taken from the film’s title, Valley of Dolls is not in fact a short homage to the work of late sexploitation master Russ Meyer. Instead, Fritz Schumann’s documentary is a sensitive portrait of Ayano Tsukimi, an elderly woman from the small village of Nagoro in Japan, who creates life-sized dolls based on people who used to live in the valley, to make up for the dwindling population. Crafted to resemble fellow men and women from her community who have either died or moved away, Tsukimi’s dolls are put in places around her hometown that were important to the inhabitants they’re modelled on or to simply make them blend in with their surroundings.

Although this might seem like a hobby with some creepy tendencies, it’s rather a labour of love for Ayano. With her husband and daughter living away from her in another city, she uses her free time to create memories – literally. Photographer Fritz Schumann captures the story with a simple but effective sense of framing and montage, which create a feeling of the calmness that life is lived with in Nagaro, with a population of about 37 people and 350 dolls.

The film also works as a meditation on mortality and what we leave behind. This is a question a lot of people face, and it’s an especially busying thought for artists and anyone who strives to create something that might outlast oneself. For Ayano, who spends her time memorialising those who are no longer around through her creativity, it will be her work as an artist – as well as a doll of herself – that will hopefully be the lasting memory she leaves on this world