Vienna Waits For You

Anna should have had a closer look at the fine-print of her rental contract – for the old Viennese apartment is a creature with never ending appetite, living off the youth of its residents.
READ REVIEW
Next Previous

Vienna Waits For You 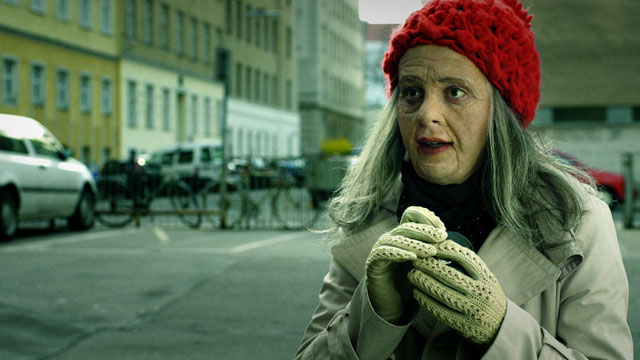 Here at Short of the Week, we’re unabashed fans of strong production design in our short selections. So, despite its prodigious length, it’s hard not to recommend a film like Vienna Waits For You, a #longshort where the set design is essentially the protagonist. You see, this is a monster movie where the monster in the room is, in fact, the room itself.

Like many a horror setup, Vienna Waits For You centers on a young female protagonist. Anna, fresh off a break up with her boyfriend is searching for a place to live. Unfortunately, she settles on an apartment that wants far more than her rent check. Soon, she finds her youth being sucked out by the cursed flat’s interior.

Director Dominik Hartl cites the early work of David Cronenberg, Tim Burton, and Jean-Pierre Jeunet as inspiration for the film. But, I’d also throw Sam Raimi’s name into the mix.Vienna Waits For You just strikes that same tonal balance of horror and comedy that Raimi popularized with films like Evil Dead 2 and Drag Me to Hell.

Communicating via e-mail, Hartl explains where the crazy concept came from: “The initial idea of the film was to tell a horror-story that had a genuine Viennese twist in it. Since almost everyone in this city lives in houses that were built in the 19th century, we are all confronted with these old-fashioned, sometimes even morbid apartments.”

It would have been so easy for Hartl and company to make the youth-sucking antagonist of the film a physical entity—a demon or a witch. But, the apartment itself is all the more terrifying—a nameless, faceless entity adorned with stained wall paper and ancient lace doilies. It’s your grandmother’s old apartment—the horror edition. You can practically smell the mildew and moth balls in every frame.

Of course, I’d be remiss if I didn’t discuss the film’s stellar visual effects and makeup. Hartl reveals that almost everything in the film was accomplished practically. Apart from a few digital skin replacements, all “aging” and other special effects were done entirely in camera and then later composited digitally. The one major exception would be the film’s stellar final shot, where a few of the elements were rendered entirely using CG. Without spoiling too much, let me just say, it will really suck you in (*cues rim shot* *Try the veal*).

With so many horror shorts populating the internet, a film like Vienna Waits For You manages to subvert the genre a bit, infusing together impressive style, unique effects, and an unconventional antagonist—thankfully, there’s not a single zombie to be found!   Admittedly, the film’s pacing and length isn’t exactly conducive for a causal internet viewer (I’m of the opinion that a stronger 18 minute cut is hiding within this film’s shaggy shell), but considering Short of the Week’s penchant for developed narratives, it would be bad form not to recommend this #longshort to fellow film lovers. So, be patient, take your time with this one: as Billy Joel famously crooned, Vienna will wait for you.
Filmmaker Website Glaciar Films
LIKE TWEET