Shot on location in Hasidic Brooklyn, this film puts a comedic spin on the typical dark NYC gang film.
READ REVIEW
Next Previous 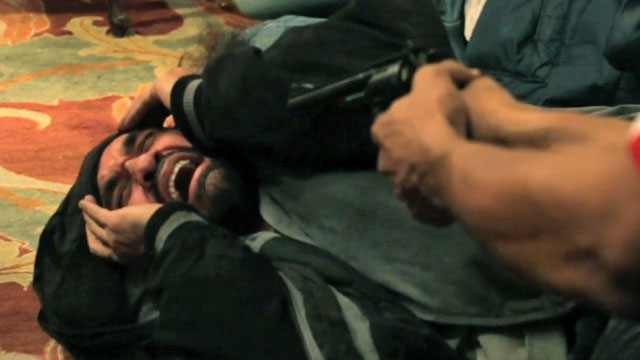 It’s rare to find good action comedy. It’s what makes Hollywood salivate but is so often mishandled at the hands of an amateur. Not so in Michael E Wood’s Gowanus 83—a light hearted take on Brooklyn gang life. We meet our main character, a former hoodlum trying to get out of the game, as he discusses the merits of various Broadway musicals with a friend. After the two jump into an off duty taxi, they’re mistakenly dragged into the drama of two desperate criminals who need $40,000. What’s a stake? A dog—held ransom in the Cadillac SUV behind them. The two criminals share a quick tearful moment as they flip through photos of the dog. It’s this sort of upside-down world that makes Gowanus 83 a real pleasure to watch.

Gowanus 83 offers a refreshing contrast to the popular neo-realism of NYC crime dramas (or even the heavy drama of Lee Daniel’s Precious) by approaching the issues of crime and gang life with an air of whimsy and humor. At the same time, the film offers a new African-American comedic voice for those who find it difficult to connect with the silliness of Tyler Perry’s Maeda films.

Michael, a filmmaker comfortable in many positions be it behind the camera or behind the keyboard, flexes his writing (along with Chris Arp) and directing skills on Gowanus 83. The writing is great—perhaps at its best with the dialogue and interesting cast of characters from the tazer-toting Jewish law enforcer to the Oprah-loving drug dealer. The acting is superb—the cast plays the comedy just right. The music is a well-chosen mix of hard rap and classical to amp up the comedy yet again.

My only complaint is the filmmaker’s release strategy. We first saw Gowanus 83 nearly three years ago when it first came online. But just days later, Michael chose to pull it down, and it’s been in festival purgatory ever since. It’s still a great film, but one can only wonder what could’ve happened had things gone another way.