There’s a Man in the Woods

A teacher's life quickly spirals out of control after young Sid claims to have seen a man in the woods.
READ REVIEW
Next Previous

There’s a Man in the Woods 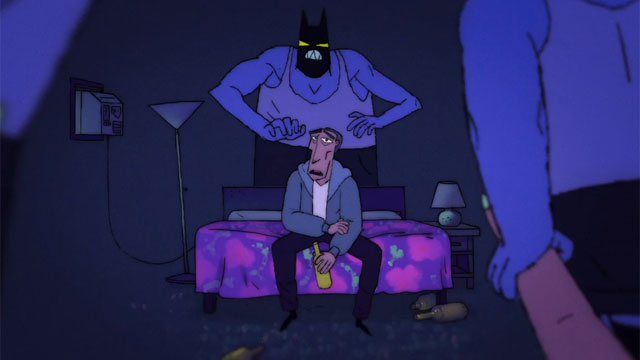 Catching our eye here at Short of the Week with a succession of Vimeo ‘Staff Picks’ for his detailed and imaginative animations, California Institute of the Arts student Jacob Streilein notches it up a level with his darkly poet graduation film There’s a Man in the Woods. Building on the impressive style and compelling storytelling displayed in his earlier shorts Swelter and Punctuwool, Streilein’s latest film once again showcases an animator honing his skills and perfecting his approach.

Following a teacher at an elementary school who tries to keep control of his life as rumours of a serial killer in the woods nearby threaten to destroy the job he loves, Streilein’s narrative immediately feels classical, yet contemporary and topical. Like a modern take on the well-loved Aesop Fable The Boy Who Cried Wolf, his plot feels more than just a compelling story, with its rhythmical and poetic approach making it feel almost allegorical in places. Cleverly picking up pace throughout its sub 4-minute duration, as the story of its protagonist teacher quickly spirals out of control, what originally felt like a simple story of a childhood lie quickly transforms into something much darker as we’re caught up in the filmmaker’s whirlwind delivery.

Amassing over 100k views and picking up another ‘Staff Pick’ on Vimeo since being released a couple of days ago, Streilein’s film seems to have quickly caught the attention of the online film community and its easy to see why. There’s a Man in the Woods seems like perfect material for the internet viewer; short, snappy and darkly comic, it has you instantly searching for the share button.

My only real complaint, I wanted more!

View the rest of the recently released Cal Arts films on their Character Animation channel on Vimeo.