Anton may be done with life, but life ain’t done with Anton. In his convincing decision to change his measly existence he discovers the real greatness of life.
READ REVIEW
Next Previous 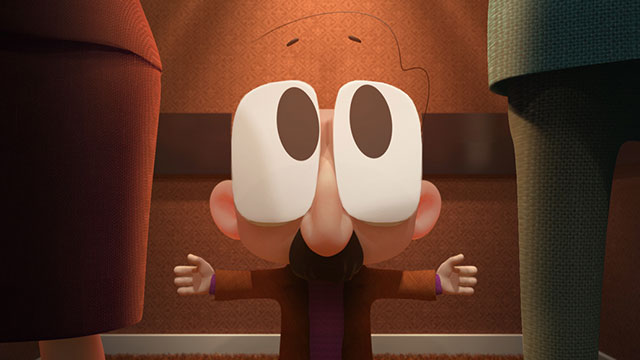 A lot is said about how hard it is for the “little man” to live in a world that’s controlled by bigger forces making decisions above one’s head. We all know what it feels like to have other people stepping over us and what it’s like to feel small with everything that’s going on around us. Playful Dutch animation Life is Beautiful takes these metaphorical images literally, telling the story of Anton, a man who has grown frustrated at how he’s always been the smallest person among his peers.

Cleverly introducing us to the trials and tribulations Anton has suffered throughout his life in a montage of family photos lasting a mere 30 seconds, director Ben Brand quickly launches his audience into the adult life of his protagonist as he struggles to get respect from those around him. Pushed to the limits of what he can take, when Anton decides to throw his life away, the afterlife doesn’t instantly offer the relief he’s been so desperately searching for. With an ethereal light pulling him towards it, Anton soon discovers that sometimes what we consider our biggest weakness, might actually turn out to be our biggest strength.

Beautifully animated by director Ben Brand and his team, the film finds a charming aesthetic to show the world Anton inhabits, delivering a rather interesting take on what after-life might look like. Told with a dry sense of humour, Life is Beautiful mixes oddball and supernatural elements with melancholic and tragicomic scenes, which let the viewer meditate on how we experience our own surroundings and place in life.

Director Brand has just seen his imaginatively titled debut feature film Find that dumb little bitch and throw her into the river accepted into the Oversteek development scheme, so hopefully we’ll be hearing more about that in the future.