All You Can Eat

At one time, Randy Stormberg wanted to be a comedian. But now it's nine-thirty in the morning and he's already eaten an entire bucket of popcorn shrimp.
READ REVIEW
Next Previous

All You Can Eat 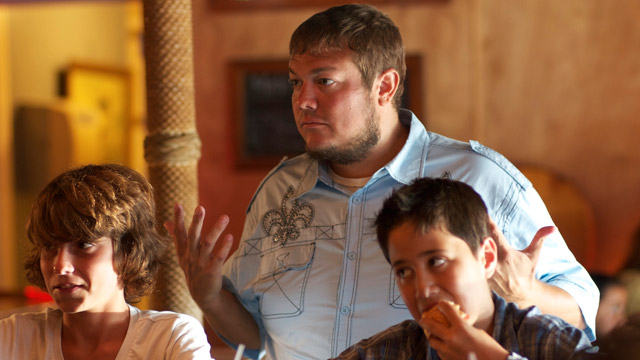 The host with frosted-tips leans over the chef’s table and takes a bite, handling the overstuffed hamburger in his hands like a football, then he smiles at the camera and utters a primordial grunt of satisfaction: “Mmm.” Somewhere offscreen, a producer yells, “Cut!”, and the host hastily spits out whatever’s left of the patty into the trash, cursing at whoever made him take the unfortunate mouthful. Too far-fetched? Samy Burch and Alex Mechanik don’t think so. In All You Can Eat, an Official Selection of the 2013 Slamdance Film Festival, Burch and Mechanik offer us an honest, dejected look into the behind-the-scenes antics of one such food show, one where the host may just be on the verge of a “Winnebago Man”-level meltdown.

Matt Warzel plays Randy Stormberg, the under-employed sadsack host of All You Can Eat, a Food Network-esque TV show that follows Stormberg across the country as he attempts to find the best local joints a town can offer (here’s looking at you, Diners, Drive-Ins, & Dives). When he’s not choking down greasy food or pleading with his agent to find him better roles, Randy spends his time trying to jump-start his failing comedy career; early on in the short, Randy looks at his hairstylist and asks:

“Did you watch my stand-up video?”

“Can you send it to your friends?”

Randy whines (“Do I have to take another bite? I’m on my diet this week”), blows off a potential hook-up with a waitress, shows little compassion for those around him – even when a local tragedy occurs – and yet, through it all, we regain a strange sense of affection for Stormberg, thanks in no small part to Warzel. As Stormberg, Warzel makes dead-pan delivery of (mostly) improvised dialogue look easy, balancing the host’s acerbic and prickly nature with an innate sense of likability.

Co-Writers/Directors/Editors Burch and Mechanik shot the film in Wilmington, NC, during a three-day hiatus from being “bottom-feeders on a big action movie.” With virtually no budget (save for the cost of hamburgers for the cast and crew), the filmmakers recruited friends and made use of “Winnie’s Tavern”, a local establishment that graciously allowed filming on a day the restaurant was closed for business. Burch and Mechanik have obviously seen their share of Food Network shows – the quick-zooms of the camera, the over-caffeinated host, the clueless chef, and the seemingly-forced quotes from customers about the food (explained here as fed to them by producers) all feel incredibly accurate during the “produced” section of the film. The conceit of the behind-the-scenes documentary may not always be consistent (the shot-reverse-shot during Randy’s exchange with a waitress feels like unfair access, and it’s never totally clear who’s doing all the filming), but you forgive the film those misgivings, indulging instead in the dark and often biting satire.

At the moment, Mechanik and Burch are working hard to finish their next short film – which, for production, involved them throwing a “live beauty pageant in Queens”. While we await their next directorial effort, you can check out their other comedy work on their YouTube channel.