Four friends are about to leave the safe confines of their small town in pursuit of their dreams, but one young man plans on staying and won’t let them go without a fight.
READ REVIEW
Next Previous 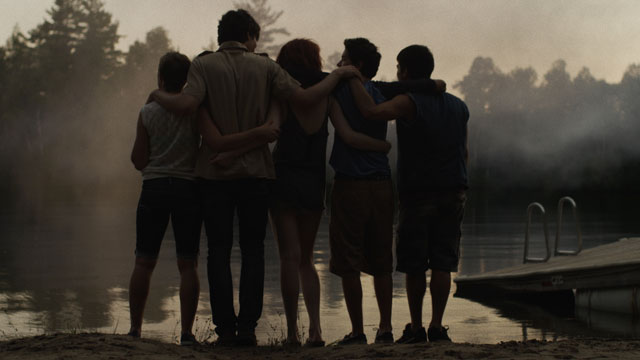 Freshwater goosebumps. Roman candle shootouts. S’mores, singalongs, and sunsets. These are just some of the artifacts of youthful summers, sensory memories that are highly individualistic‚ yet strangely universal, no matter where one was raised. To watch Brooks Reynolds’ latest short film, Set No Path, is to be dunked head-first in a pool of said memories: the syrupy sweetness of young love, the ephemeral feeling of invincibility, and the aching reality of life beyond small-town borders. Reynolds provides us with a haunting, poetic narrative, gorgeously rendered and steeped in teenage nostalgia.

“We will still be friends. Connections like ours are permanent.”

Sam, Taylor, Owen, Jordan, and Carly are five life-long friends on the verge of major change: it’s the last day of summer, the last day of togetherness before they go their own respective ways, spread apart geographically to different schools and careers. As a celebratory send-off, the five decide to take an overnight trip to a lakeside cottage, bent on making the most out of their last remaining hours together as a unit. It’s a night none of them will soon forget — a night when secrets will be revealed, relationships will be tested, and unspoken feelings will finally rise to the forefront.

Drawing inspiration from songs by La Dispute and The Story So Far, writer/director Reynolds (who also produced, shot, and edited the film himself) crafted the story around visual ideas first, letting the characters and their motivations fall into place once the locations and mood were determined. Reynolds’ professional photography background shines through in every shot; the stunning blend of RED Epic footage and Super 8 film frames the teenagers as both music-video superstars (with sparklers and flare guns) and naive kids, unaware of the harsh realities that the larger world has in store for them. Reynolds and his small team shot the film at a location just north of Toronto. For the majority of the production, the cast and crew camped out at their filming location, canoeing in the mornings together before filming at night, forming bonds and friendships that feel inhabited instead of rehearsed. To capture flashback footage, Reynolds handed the Super 8 camera over to the cast, letting the actors film themselves in the moment, bringing an extra layer of authenticity to their onscreen relationships.

Both unapologetically sentimental and heart-breakingly realistic, Set No Path is a wonder of a short, a film that stays with you, almost daring you not to tear up or have an emotional connection with the characters onscreen. And in the montage that closes out the film—an amalgam of footage blending the characters’ past, present, and future—Reynolds solidifies his status as a talent to watch. While we wait for his next directorial effort (which he says is in the works), you can check out his photography portfolio here.