Private eye Vincent Black is hired by an old man hoping to recover his lost ideas.
READ REVIEW
Next Previous 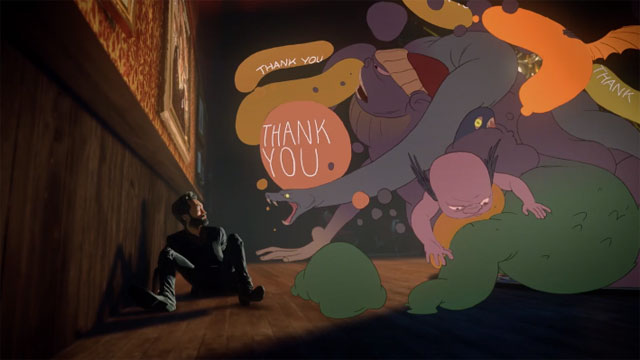 Created by Brazilian comic book artist Rafael Grampá and Absolut Facebook fans worldwide, Dark Noir takes its audience into the seedy underworld of private eye Vincent Black as he tries to recover an artist’s lost creativity. Combining a strong visual style with a novel approach to storytelling, this branded film takes us on a bleak journey of discovery, with a narrative formed with the help of the alcoholic drink company’s social media fans.

I’m a cursed man, I see things other people can’t…Damned from the day is was born, found on the streets with the rats. But I’ve always been one step ahead. I can see the world of ideas and the daemon creatures that live in it.

Hired by an elderly stranger desperate for help, our sleuth protagonist’s search for answers means the investigator soon finds himself confronting a dark spirit called Loneliness and Madaleana Proud, a dancer who remained young by sucking the power of daemon’s. Seeking retribution for his creatively challenged client, Black may have set out to discover lost ideas, but ultimately he ends up uncovering a lot more about his dark entrance into the world.

Inviting people to unleash their imagination and help structure the narrative over a three week period, Grampá and the Absolut social media team encouraged the film’s potential audience to join in the production process and make some key decisions in Dark Noir’s plot. The Brazilian artist’s first foray into the world of short film directing, his comic book drawing were turned into a mixture of 2D and 3D animation by the talented Red Knuckles animation studio.

With the director explaining in the ‘Making of’ video that “this project wasn’t just about my art, it was about empowering everyone’s creativity”, whilst Grampá’s short is a successful stand alone piece, it’s the production process that is bound to spur the most debate. Looking to make the world of filmmaking and visual storytelling more accessible to those eager to be involved, Dark Noir is a healthy reminder that crowd-sourcing isn’t just about raising funds.