S is for Bird

An exceptionally grumpy employee at the Family Fun Centre may get closer to finding love and happiness after he's befriended by a precocious 6-year-old.
READ REVIEW
Next Previous

S is for Bird 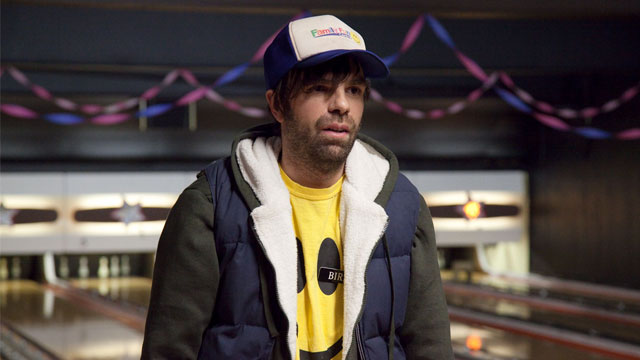 Got a hankering for something sweet? I present to you Matt Sadowski’s brisk dramedy, S is for Bird—a meet-cute film centered on a disgruntled employee at a Chuck E Cheese knockoff and one of its adorable pint-sized patrons.

Now, when it comes to stock film characters, one of my biggest pet peeves is the “precocious kid.” Something about a child spouting dialogue and wisdom beyond their years just reeks of a lazy screenwriter unable to come up with an original narrative device. But, here, Sadowski takes a tired cliché and gives it a surprisingly amount of humor and heart. Young Chloe isn’t a know-it-all. She’s just a kid who needs a friend. As does our protagonist, Bird. As such, their relationship feels authentic, and Bird’s character arc—albeit simple—is ultimately rewarding.

Taking place entirely inside the confines of a depressing “Family Fun Centre,” the film’s setting is a character in its own right. You can practically smell the stale popcorn and cardboard-flavored pizza. This is the place where adult dreams go to die, drowned in ball pits and covered in dried puke. In other words, it’s hilarious—the perfectly ironic environment for the film’s 8 minutes to play out.

Although his name may not seem immediately familiar, writer and director Matt Sadowski is no stranger to the film world. Beyond being the successful writer and director of several other shorts that played numerous festivals, he also has a history as a young actor. Yup, that’s right, Mr. Sadowski is none other than Bridge Carson, the Green Ranger, in the 13th season of the Power Rangers. Excuse me while I squeal with childhood nostalgia.

In a way, it’s quite fitting for the star of a favorite kid’s television show to make a film about a depressed children’s center worker. Art, like life, often comes full circle. With S is for Bird—which was partially funded by the National Screen Institute—Sadowski shows off a witty and very sweet narrative voice. He’s currently in post-production on a feature film called Pretend We’re Kissing, which he monikers a “non-rom-com.” Check it out at www.nonromcom.com. And, of course, keep up with his musings on Twitter.