The Purge: The Morning After

The morning after the annual Purge, Elmer confronts his co-worker Dan about the atrocities committed the night before. Awkward.
READ REVIEW
Next Previous

The Purge: The Morning After 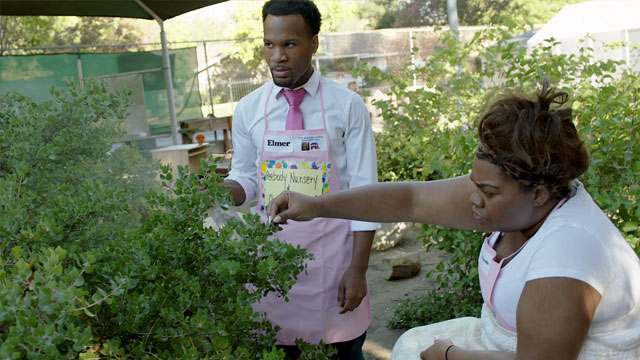 An imagined sequel to The Purge (the 2013 high-concept “horror” film about the single night every year when any and all crime is legal) may not sound like prime fodder for comedy, but in director Johnny Ray Gill’s short, The Purge: The Morning After, we discover just how (darkly) comedic confronting a co-worker the morning following such a horrific night can be.

Co-Writer/Director/Producer Gill plays Elmer, a disgruntled employee of the Peebody Nursery and Check Cashin’ establishment who takes it upon himself to confront his co-worker, Daniel (played by co-writer Daniel Rubiano) about the atrocities committed the night before, when “someone put a musty G-string in [Elmer’s] mouth and proceeded to murder [his] entire family.” Think of it as the best SNL Short you’ve never seen. Gill said the idea began as a joke between friends after a trip to the cinema, imagining how “awkward it would be if someone tried to kill you per The Purge rules — a friend, a coworker, whatever — and that person failed, but you still had to live with that individual knowing that they tried to murder you.” Gill and Rubiano self-funded the project, which was shot in less than seven hours at a borrowed nursery facility on the Arri Alexa (seriously, how many comedy shorts can say they were shot on the Alexa?) by Colton Davie.

Boasting appropriate mockumentary-style photography and some well-placed guitar licks, The Purge: The Morning After is the rare comedic short film that doesn’t overstay its welcome: at just five-and-a-half minutes, the piece is all killer (pun intended). As a writer/director, Gill shows a knack for comedic tone and timing—the film is ripe with awkward pauses, unsure glances, and laugh-out-loud one-liners; and while this could have been a one-note sketch, Gill and company instead pile on the layers of absurdity, deftly toeing the line between workplace farce and black comedy, all thanks to some strong editing and acting chops (especially from supporting cast-member, Da’Vine Joy Randolph).

You can catch Johnny Ray Gill on Sundance Channel’s Rectify (currently filming its second season) while we wait to see what kind of “sequel” he’ll mine from The Purge: Anarchy.