In the depths of a snowy forest in an unknown wartime, two soldiers from opposing armies try to outwit each other in a perilous game of cat and mouse.
READ REVIEW
Next Previous 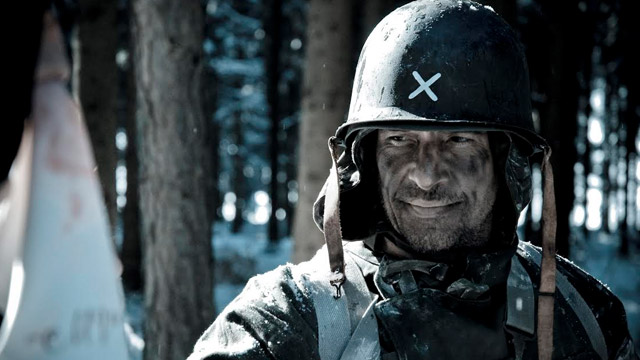 Playing out like a live-action Looney Tunes short (albeit, a very grim Looney Tunes short), Serbian director Acim Vasic’s 8 a is darkly comic misadventure centering on two unnamed foes as they square off in a morbid, war-torn teeter-totter of one-upmanship. By putting live action characters at the center of what is essentially a cartoonish, absurd world, Vasic is able to craft something new—a movie that makes you grimace as much as it does smile. Tonally you’d think it would be a tough balancing act to pull off, but Vasic does so with aplomb—his tongue firmly set in cheek, his characters’ feet firmly entrenched on land mine.

We often talk about shorts as representative examples of a filmmaker’s overarching style. That statement definitely holds true for 8. The film’s oddball aesthetic and tone is complemented by innovative shot choices and camera movement, proving that Vasic clearly has a strong directorial vision. Admittedly, that’s just a really long winded way of saying that this film feels like it has a voice—an oddball entry into a genre that is saturated with so many Saving Private Ryan and Blackhawk Down ripoffs. Instead of copying what so many other war films have already done, 8, instead, plays with an entirely different inspirational toolbox: Tom and Jerry cartoons. And, let me tell ya, considering the sheer number of shorts that I sift through, that creative choice feels damn refreshing.

The film’s dabbling with absurdism calls to mind other literary allusions as well. While not a direct one to one comparison, the English major in me found traces of Beckett’s Waiting for Godot. Something about the two characters in a nameless place and war, operating against each other without purpose and meaning, gives the film a certain satirical, modernist bent. Perhaps I’m reading into things too much, but the dance between the film’s two adversaries could be analyzed on a deeper level, as both an anti-war statement and a representative example of existential nihilism. Oh, did I mention yet that I was an English major?

Shot over the course of four days in a forest near Fribourg in Switzerland, the film features cracking production design, reflecting an essence of “timeless war.” Vasic culled together various vintage objects from markets in both France and his native Serbia to really sell the look. Even the parachute was real—an authentic remnant from WWII which he borrowed from a friend of his Father’s.

8 played a slew of smaller festivals around the world, and eventually got Vasic’s foot in the door at Partizan, an award-winning production company with offices across the globe. As for what’s next, Vasic is contemplating feature aspirations while also working on more short film projects. His latest short, Dark Side of the Earth,  is a true low budget endeavor—a Sci-Fi film shot on an iPhone that is making festival rounds.