A man tries to relive his failed relationship by hiring an actress to play his ex-­girlfriend. If only she could get the accent right…
READ REVIEW
Next Previous 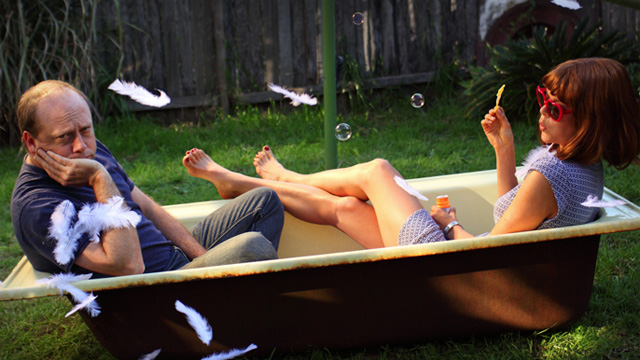 Oscar Wilde once famously stated that “the heart was made to be broken” and heartbreak is something the majority of will experience in our lifetimes. Bringing this time of romantic grief to screen with just the right balance of humour and sincerity, Matthew Jenkin’s short comedy ‘Cockatoo’ is the engaging tale of a man going the extra mile to get over his last relationship.

Desperately trying to move on after his previous girlfriend left him, Michael chooses the 6-month anniversary of his break-up to contact the Reality Dreams agency to help him find closure. Sending Melanie, an actress prepared to take on any role, the agency worker aids our lovesick protagonist by helping him reenact his doomed romance. Inspired to write the script after lead actress Matilda Brown asked him to write her a role, filmmaker Jenkin came upon the idea of a narrative revolving around a surrogate girlfriend after reading a newspaper article about a friendship service in Sydney. Initially beginning life as a dark drama entitled Second Chance, which saw Michael killing the actress he hired to play his ex, the director admitted the transition to comedy was something that happened organically after a series of rewrites.

At the heart of ‘Cockatoo’, Jenkin’s has written a wonderful script, finding the perfect equilibrium between empathy and comedy so you truly feel for his characters, but still allow yourself to laugh at their situations. Helped to bring his narrative to life with some compelling performances from his cast, Short of the Week spoke to writer/director Jenkin via email, to find out more about why he chose this topic and how we went about casting his film:

“Everyone at some point in their lives has experienced heart ache of some kind, so it’s a universal theme. It’s not gender specific or race specific – it affects all of us. And the fact that Michael is in his 40s and lonely is even more heartbreaking – as you get older, it gets harder to date and meet people. That’s where the subtlety of Alan’s performance comes in – you really feel his loneliness and anguish, it’s a beautiful performance. Alan was always my first choice. I saw him in a play that he had written and starred in six years previous to filming ‘Cockatoo’ and I knew I wanted to work with him from that moment. So subconsciously I think I wrote this specifically for him and thankfully he agreed on the first draft! I had worked with Kate on an online comedy sketch a few months previous to filming and loved her facial mannerisms. She has wonderful comedic timing and luckily could do an English accent. I was very lucky to get this cast and work with them. As I wrote the role specifically for Matilda, she wasn’t allowed to say no – ha! Matilda’s range of accents is hilarious! The irony is her mum is English but doing an English accent wasn’t easy for her! I just let Matilda do her thing and we deliberately pushed it so it was in no way English. It was really just a case of let’s see what comes out of her mouth and it was gold! At one point, the crew thought she was doing an Indian accent which was funny.”

Having screened at over 30 international film festivals, where it won numerous Audience Awards, Jenkin is currently in the process of developing the ‘Cockatoo’ narrative into a TV series called Reality Dreams. Expanding on Melanie’s story, the television adaptation follows the agency worker as she tries to balance her day job with pursuing her own dreams of becoming an actress. However, this isn’t the only project Jenkin is working on in 2014, with the filmmaker also writing a feature and planning to shoot a dramatic short, it looks like being a busy year for the Australian director.