A man frantically tries to hide an embarrassing accident in this morning-after tale.
READ REVIEW
Next Previous 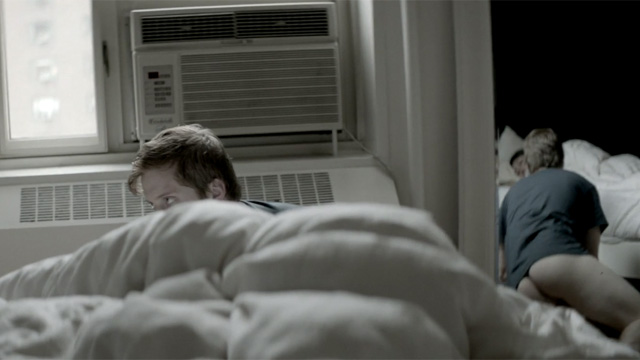 Bedwetting isn’t usually a common theme of cinema, but then again most filmmakers don’t treat this saturated slumber condition with the same level of tension that New York city based director John Strong does. Following the frantic escapades of an unknown male as he desperately tries to hide his nocturnal indiscretion from the girl he’s sharing a bed with, who would have guessed a narrative revolving around bladder malfunctions could prove to be such an anxious watch.

Here on SotW, we often describe the short film format as a filmmaker’s playground and this definitely seems to be the case with the work of John Strong. His playful narrative revolving around one man’s distraught attempts to hide a bedwetting incident feels like the perfect example of a storyteller playing with the flexible boundaries the medium allows. In an on-screen world, where apocalyptic events, super-heroes and monsters rule, a man trying to clear up urine doesn’t exactly rank highly in terms of drama and it’s to the director’s credit that he really ramps up the theatrics in his film. Treating his protagonists attempts to clean soaked sheets like a stealthy ninja attack, Guilty is riddled with moments where as a viewer you feel so close to, and engaged with, the on-screen actions you don’t dare breathe too loud (or inhale too deeply). As the films simple concept unwinds and your dragged deeper into the “cover-up”, a buzzing phone and a stirring sleeper suddenly feels as dramatic as any apocalyptic event ever has. It might not be the end of world as such, but it feels like it could be the end of this one man’s world.

Taking on pretty much every role available on the production himself, Strong not only wrote and directed Guilty, he also took on the task of shooting and editing his film. The filmmaker did however hand over one essential job to someone else – entrusting the sound design of his short to Daniel Sheppard. With no dialogue throughout its 10-minute duration the audio accompaniment to Guilty was always going to play a major role in the film’s success and Strong and Sheppard make a truly inspired decision with their soundtrack choice. Cutting (quite abruptly at times) between an ethereal choral track and the over-exaggerated squeaks and creaks of a quiet flat, Sheppard’s wonderful audio mix perfectly magnifies the tense situation of the covert mission played out in the film’s narrative.

Released as part of a series of videos commissioned for Dazed’s Visionaries series, that also includes the darkly funny tale of vegetable insertion “Don’t Look at Me” and a hypnotising video for Foxygen set in a karaoke bar, Strong seems determined to test the boundaries of his audience with a series of uncomfortable and confronting narratives. Serving up his own eccentric mix of dark comedy with a side-order of unease, the uncompromising films of this emerging director may be unconventional and will certainly not to everyone’s taste, but there’s is no denying the unique, emotional and entertaining storytelling on show in his work. With Dazed’s curated series claiming to be on the lookout for groundbreaking, original video content, we can’t help but think they made the perfect choice with John Strong.