While a small-town sheriff investigates a mysterious multiple murder scene, a brilliant young software engineer is bizarrely linked to the crime–and to a much bigger conspiracy.
READ REVIEW
Next Previous 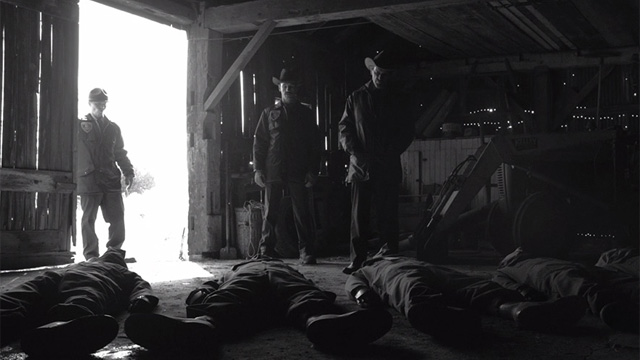 Conceived from ideas surrounding a fear of where technology will lead us in the future, Manifold from Toronto based filmmaker, designer and musician Anthony Scott Burns is a curious blend of crime drama and science fiction, offering a glimpse into a world hoping to be expanded in a feature length film. Following the journey of a software engineer, who travels to find a man who he suspects to be a long-lost brother, after his profile was identified by face recognition technology he’s been working on. Scott Burns’ short soon transcends into a multi-layered narrative with the introduction of a small-town sheriff investigating a mysterious multiple murder scene and we’re left debating over how the two are connected.

Narratives as ambitious as Manifold’s don’t come along very often in the world of short film and whilst many will find the plot of this short challenging and hugely rewarding, just as many will find it baffling, frustrating and incomplete. Determined to uncover why he chose this approach to storytelling, Short of the Week dropped writer and director Anthony Scott Burns an email to quiz the filmmaker on the complexities of his narrative and whether he had any advice for those struggling to follow his story:

“This was the part of the story I really wanted to tell. An entry tease. I knew it could be confusing on first watch, but I also knew that we had an entire outline for a feature, so I wasn’t just cheating. Manifold is just a small window into this world, and hopefully people will want to see and know more. Part of enjoying this film is just accepting that we are briefly hanging out in a place that doesn’t quit exist yet. Don’t worry so much about the narrative. Experience the film for what it is… A window to moments that are crucial in the lives of the characters. All the clues are there if you need them”

To focus only on the narrative of Manifold feels somewhat unjust, its impressive script is equally matched by some exceptional production values. Deciding to shoot black and white simply because of his love for the aesthetic (a good a reason as any) and his background in film, where filmmaker’s early films were shot with the cheaper colourless stock, director Scott Burns (who also shot the film on his own Red One MX) has created a visual style that feels both classical and contemporary. Perfectly accompanying the moody visuals of his film, the filmmaker enlisted Makeup and Vanity Set to create a subtle, futuristic score to amplifying the mood and tone of Manifold. As a musician himself, we knew the score would be a vital part of the production process for Scott Burns, something he confirmed in a dialogue about his short – “I believe sound is 80% of what people feel during your film, so I think the soundtrack is the crucial key to Manifold’s mood.

Having built a career through what he describes as “trial and error for the past 20 years”, Scott Burns is a shining example that you don’t need a film school background to succeed in the industry. Creating shorts for his love of the genre and as a way to connect to like-minded people, the director admits to feeling “blessed to be in an age where we can distribute independently”, as it means he can share his work with those who will appreciate it. His distribution methods certainly seem to have been successful in reaching the right people, his short film back catalogue has recently resulted in him being signed to start developing his first 2 feature films.