A rhythmic ritual is performed by a bizarre ensemble of macabre figures.
READ REVIEW
Next Previous 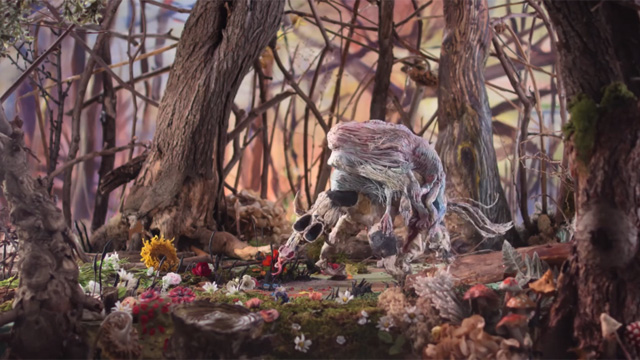 Created as part of Allison Schulnik’s second solo exhibition, the artist’s latest animated film is a celebration of traditional materials, used in untraditional ways. Her longest film yet, Eager follows a band of voiceless, faceless entities as they traverse unusual environments, reenacting a tribalistic ceremony along their journey.

Developing the style we saw in her last claymation work Mound (and the Grizzly Bear video that came before that), again artist Schulnik demonstrates technique above and beyond what you would expect to find in this field. Whilst most people will be aware of this form of stop motion animation through the work of Aardman Animation and their charming character design, Eager couldn’t be more of a departure from the work of Nick Park and crew – there are no talking animals here. Instead the filmmaker presents a series of haunting and captivating images as a parade of ghostly figures rhythmically cavort around the screen.

Having trained as a dancer before studying Experimental Animation at CalArts, movement and choreography play a large part in Schulnik’s latest film. Set to a restrained score commissioned from composer Aaron M. Olson, Eager feels at times like you are experiencing an experimental dance performance, beamed live from an alien world of synchronised flowers and boneless horses.

With all effects carried out in-camera, Schulnik’s film is a testament to what can be achieved without digital manipulation or computer wizardry. Opting for a rough around the edges aesthetic, instead of the smooth, polished look we’re used to in claymation. The technique is deceptively refined and the animation incredibly controlled, with every tiny movement calculated with a precision that could only be mustered by an artist working in complete harmony with her materials.

Described as an uncertain account of what exists somewhere between tragedy and farce, Schulnik’s unusual approach to narrative may alienate those of you searching for work based more in the realm of traditional storytelling. For those of you looking for a brand new experience in the arena of short film, the reward for engaging with Schulnik’s extraordinary work is one of resonating beauty.

Whilst here at Short of the Week we generally tend to champion short films that stick to a more traditional narrative structure than that of Eager, when films this unique and this technically accomplished come along they’re difficult to ignore. If our mission statement on this site is to discover and endorse the next generation of innovative storytellers, then ladies and gentlemen, I give you Allison Schulnik.