Dinner and a Movie

Lovestruck Randy gets more than he bargained for when he finally gets to meet his prison pen pal Crystal.
READ REVIEW
Next Previous

Dinner and a Movie 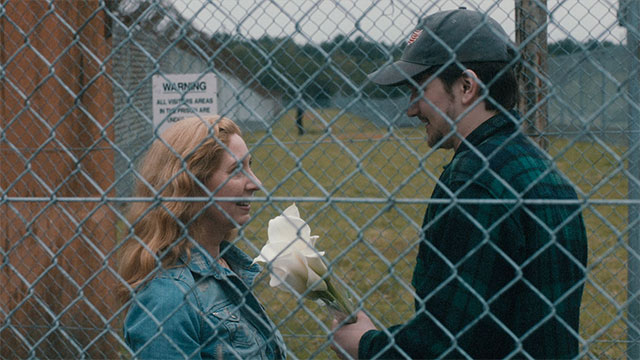 Inspired by UK television documentary Jail Date, a film which explored why increasing numbers of men are choosing to date women behind bars over the girl next door. Ben Aston’s engaging short Dinner and a Movie is the comedic tale of unsuspecting singleton Randy, as his search for love leads him into the arms of his recently released prison pen pal. Scared of love, our infatuated protagonist’s belief that he has found a risk-free way of finding a relationship are soon tested when his prospective partner brings some unexpected baggage to their first date.

Co-written by genuine midwesterner Maria Hummer (Hummer was born in Toledo, Ohio), Aston’s first major directorial decision on Dinner and a Movie revolved around the location in which the story unraveled. Shot as a London Film School student, for an exercise which dictated the filming should take place in and around London, how would Aston go about shooting a narrative set in Michigan, with a plot that felt as American as apple pie? Keen to discover why the director rejected the notion of translating the story to an English location, Short of the Week spoke to the filmmaker about why it was so important to retain the US location for the narrative:

“A British film about people at the edge of society is inexorably a statement on class, perhaps it’s the baggage of British social realism, but it’s a paradigm we weren’t interested in with this particular story. We were also eager to play with these character archetypes  Trailer Trash, The Convict, The Biker  tropes that dont completely translate to the UK. Tone remained our greatest ally in this decision. America, particularly the Midwest, is about expanse. That kind of loneliness is very different to the loneliness of a council estate. We were always walking this line between tragedy and comedy and we knew that setting the film in the UK would just push it too far one way.”

With Aston and his production team doing a sterling job in ensuring all aspects of filmmaking (from set to costume) combine perfectly to create a believable US setting for his tale, the final part of the puzzle was casting convincing actors. Like with the location of his film, Aston also came to the decision to not compromise with his cast and instead of asking British performers to put on an accent, the director set out to find authentic American actors to play the lead roles in his story – “We knew we needed to cast genuine Americans. Everyone thinks they can do an accent, but its actually unbelievably difficult to get it correct, let alone being able to do so while giving a good performance. After meeting pretty much every working American actor in London we were so blessed in finding Anne and Nathan, who both give brilliant performances.”

With the film drastically changing from classic drama to comedy drama (or dramedy) after a discussion between Aston and Hummer revolving around likely outcomes for the unusual premise of Dinner and a Movie’s narrative. The director stressed how important it was to have someone with a screenwriting background involved when developing the early stages of his script – “What Maria gets better than any writer I know is character; she ‘finds’ stories through characters, which can often be a strange and difficult process. Before Dinner and a Movie I would go in knowing exactly what the beats are going to be, but for Maria it’s an act of discovery. As such a drastic re-write that would horrify me would be an easy step for her. Her way is brave and less precious but it always leads to original and exciting stuff.”

Eager to build on the blossoming creative partnership on show in Dinner and a Movie, director Aston and writer Hummer are now working on their second movie together He Took His Skin Off For Me. Described by the filmmaker as “a sort of domestic fairytale about a man who takes his skin off for his girlfriend, and why it probably wasn’t the best idea”. HTHSOFM is currently in the final stages of post-production, with Aston planning to take it on a tour of film festivals before releasing it online for us all to bask its fleshy uniqueness.