An advanced virtual machine, with a troubling choice for humanity, reaches out for help to a humble janitor.
READ REVIEW
Next Previous 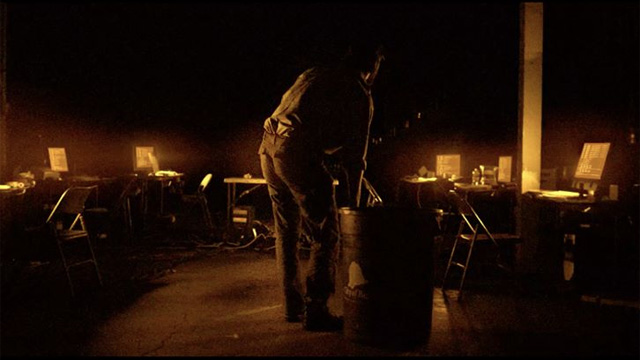 Hello, world.  Hello, janitor.  Goodbye, all human life.  With this gritty short, 1.7 billion lives are at stake as time is running out to sort out the difference between ethics and heroism. With the technician gone, a self-aware machine takes a chance and offers a janitor the opportunity to save humanity and change history.  A choice has to be made, but with dire consequences, who do you trust?  This short delivers big ideas with a simple set up that highlights the impact of effective writing while utilizing irresistible suspense.

Henry Dunham was inspired to create this short once he felt that he finally had access to the equipment that allowed him to produce the short with the exact cinematic vision he felt was appropriate for the story. And, what writer and director Dunham does is take what others might stretch out to a diluted full feature and boils it down to the key elements to create a gripping short.  With The Awareness, we have all the elements of a full feature: a character estranged from his family, an egomaniac tech genius, a rogue machine, cops and guns. However, by focusing on creating a short from these variables, Henry in no way leaves out the gut-punch ride, instead he just saved us 80-minutes of waiting for the good parts. You can thank him for that.  In fact, once the story really picks up the writing is strong enough that this short really grabs you with just a janitor and a monitor screen.

Sure, there are some implausible moments in this story, but we wouldn’t have a film industry if the audience pulled over every film for being implausible. Realistically, the experience and the mood of this short provides enough distraction for you to hold on and go along for the suspenseful ride.

Ultimately, this is a simple set up that addresses some complex themes of how far people (and computers) will go to protect and preserve themselves even in the face of significant consequences.  Henry delivers an effective piece, anthropomorphizing a machine that pulls both the audience and characters into a precarious moment of trust and intrigue…I should probably stop there before I give away too much of the story.