An aging circus performer seeks to mend the troubled relationship he has with his young son.
READ REVIEW
Next Previous 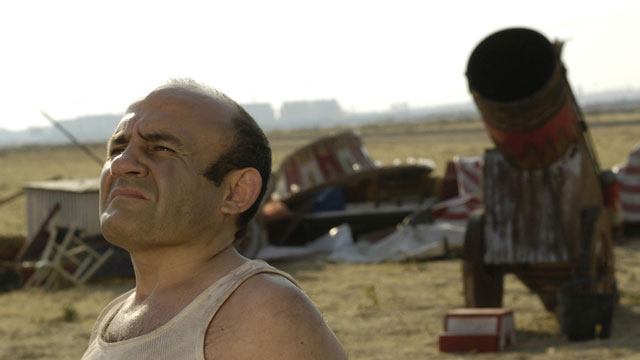 Some shorts, after a solid festival run, just sort of fade quietly into that good night of internet oblivion, lost in the veritable sea of weblogs and cat videos. The Great Zambini is such a film—a 2005 festival darling with impressive pedigree that I only discovered by happenstance through a friend’s facebook recommendation. Judging by its paltry number of views on YouTube (and poor quality of upload*), this one has really been trying its hardest not to get noticed. Though, it has previously appeared in the wild on a best of DVD compilation produced by Film Movement.

Well, as a shorts curator, sometimes I consider it as much my duty to highlight new films as it is to hang a lantern on forgotten favorites. Fortunately, The Great Zambini is just as emotionally resonant now as it was back in the mid-aughts. This is a wonderfully sentimental film—the story of an aging dwarf circus performer who seeks to inspire and connect with his alienated son. It’s really hard to not to be charmed by this one; even cynics will be won over by the nuanced performances and sumptuous cinematography (yeah, I know digital is king, but 35mm just looks so damn good). Most impressive of all, it tells its story without a lick of dialogue. As such, it’s one of those beautiful, poetic reminders that the language of film truly is universal.

At a slowly paced 15 minutes, admittedly, this is a short that lends itself to a theatrical setting (and is probably one reason why it has so far failed to find its internet-legs). That being said, if you invest your time, I can guarantee you will be rewarded. The ending is undeniably charming—the type of life affirming cinematic moment that just makes you feel happy to be human. It’s as magical as it is heartwarming, a story that wordlessly shows the powerful connection between father and son. Yes, for us boys, dads are the most tangible of heroes. They are role models and commissioners of wonder who, in our minds, can do practically anything—able to influence and inspire as they fight dragons, leap tall buildings in a single bound, and even journey by canon all the way to the moon and back.

*If someone can direct me to a better quality version, please let me know in the comments and I’ll gladly update the embed.