Pounding the tarmac through the seasons, a band of runners are brazenly challenged with intimate questions as they pace their routes.
READ REVIEW
Next Previous 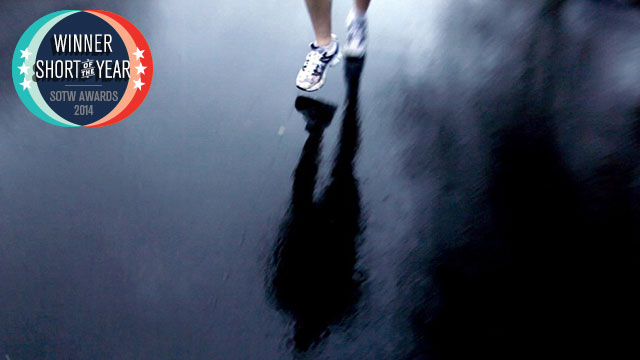 Born from the idea that people might be more open if they were asked questions while running, Matan Rochlitz & Ivo Gormley’s documentary The Runners provides an insightful glimpse into everyday life by catching their subjects at a time when their inhibitions are at their most relaxed. Quizzing the joggers on a range of personal topics, from sex to religion and marriage to mental health, The Runners takes us on an unpredictable journey through the human mind.

“I’m really sorry Andrew, for confiding in total strangers about our sex life.”

Whilst describing The Runners as a film about running is factually true, in reality it’s a description that does a huge injustice to the film and its makers. Covering a wide range of subjects in their on-the-run interviews, Rochlitz & Gormley’s film manages to take you through a myriad of emotions in its 11-minute duration. Whether it’s the bold admissions of suffering through clinical depression, confessions of parental dementia or the unabashed revelations of a couples agreement to improve their sex life. The Runners is a film that will make you laugh, smile and choke back the tears as its interviewees spill their thoughts on life and their personal experiences so far.

Filmed from the back of a bicycle trailer The Runners features some decent SLR cinematography (lets not forget for a large majority of the film the camera is on the move) and the short has been cut to a pace that perfectly compliments its kinetic subjects – the rhythmic soundtrack of footsteps pounding and heavy breathing, acting like pacesetter throughout. However, whilst the film would probably win no awards for its production values, ultimately its the resourceful and inventive concept where Rochlitz & Gormley’s documentary really impresses. So simple, you can’t believe it hasn’t been done before, its ideas like this that really restore your faith in the originality and creativity of filmmaking. An unexpectedly moving film (no pun intended), like the athletic few it features Rochlitz & Gormley’s documentary will get your heart beating and leave you feeling a little breathless.