Do You Believe In The Devil?

On the floor of a bar restroom, a man on his deathbed is offered a deal that could save his life - but in the process may destroy his humanity.
READ REVIEW
Next Previous

Do You Believe In The Devil? 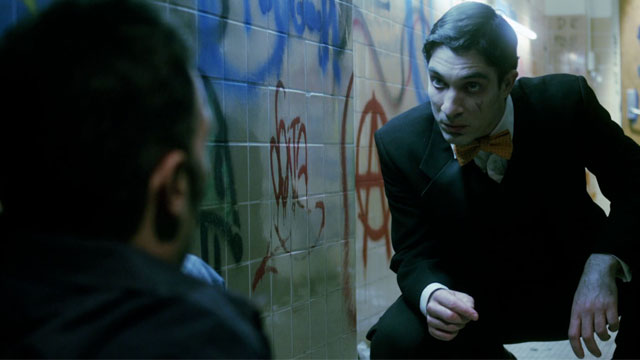 I know…I know…we’ve seen “man makes a deal with the devil” stories before. It’s well-tread narrative ground comprising everything from classical literature to failed Brendan Fraser vehicles. But, as with the best short films, Alex Grybauskas’s Do You Believe in the Devil? takes what could have been a hackneyed premise and gives it a spark of ingenuity. In other words, this ain’t your Grandpa’s morality tale. Heck, moral isn’t a word that should be used in the same sentence as this film (that’s a compliment in case you were wondering).

In Grybauskas’s vision, the angel of death isn’t some scythe-wielding, black hooded skeletor. Rather, he’s Danny Pickler—a man child trapped in existential limbo. Under his watch, our protagonist can save his soul. He just has to be wiling to kill a few people in order to do so. The premise is absurd, but really, that’s its charm, allowing Grybauskas to explore a variety of tones. The short is disturbing and morose one second, darkly humorous the next. In a lesser film, such schizophrenic mood swings would be distracting. Here, they are distinctly a part of the charm. The film’s seriousness is always counterbalanced by an underlying sense of ridiculousness, and as such, both the narrative and its players seem to be in on the joke. As a pure drama, this just wouldn’t work, and in turn, Grybauskas’s tonal experimentation is one of the primary reasons for the film’s success. It takes guts to make a movie like this—the kind of thing that would make Chuck Palahniuk proud.

Yet, beyond the outrageous premise, beyond the tongue in cheek humor, beyond the morbidity, this is a film about rationalizing. You see, we humans tend to rationalize a lot of the bad things we do in order to make ourselves feel better. And, while Do You Believe in the Devil? may take such a concept to the extreme, the message still comes through: at our core, us humans are pretty damn selfish. We’ve just gotten pretty good at telling ourselves the opposite.

Of course, all of this wouldn’t work without a strong performance to keep the film’s tonal mood swings in check. Grybauskas fortunately is able to rely on a really stellar leading turn from actor Gary Lee Mahmoud. Mahmoud’s career is mostly dotted with comedic roles. Here, he is able to stretch his comedy muscle but also round it off with equal parts empathy and psychosis. It’s a big performance, loud and manic, yet still grounded in some semblance of reality. I’d loved the hell out of it.

It took a while for Grybauskas to finally realize his directorial ambitions. After graduating film school in 2005, he slowly started working up through the post production industry in New York City. Eventually, he landed a job as a staff editor at Refinery NYC, cutting commercials and music videos. And, like so many indie filmmakers, he put his own creative projects on hold. Eventually, however, with some financial and technical support coming from his higher-ups at Refinery, he was able to get Do You Believe in the Devil? made, shooting for four days on the RED EPIC in March 2012. The film premiered at the Cleveland International Film Fest and went on to garner some nice awards including Best Horror Short at Hollyshorts and Best Short Film at the Maryland International. Now, the goal is to get some more quality eyes on his work. As for his next project, he’s already in post-production on another short film entitled, Monsters Big & Small. Be sure to like it on Facebook to learn more.