This is the story of Howard Cantour. A warrior. His life as a film critic and how he comes to terms with reviewing his hero's film.
READ REVIEW
Next Previous 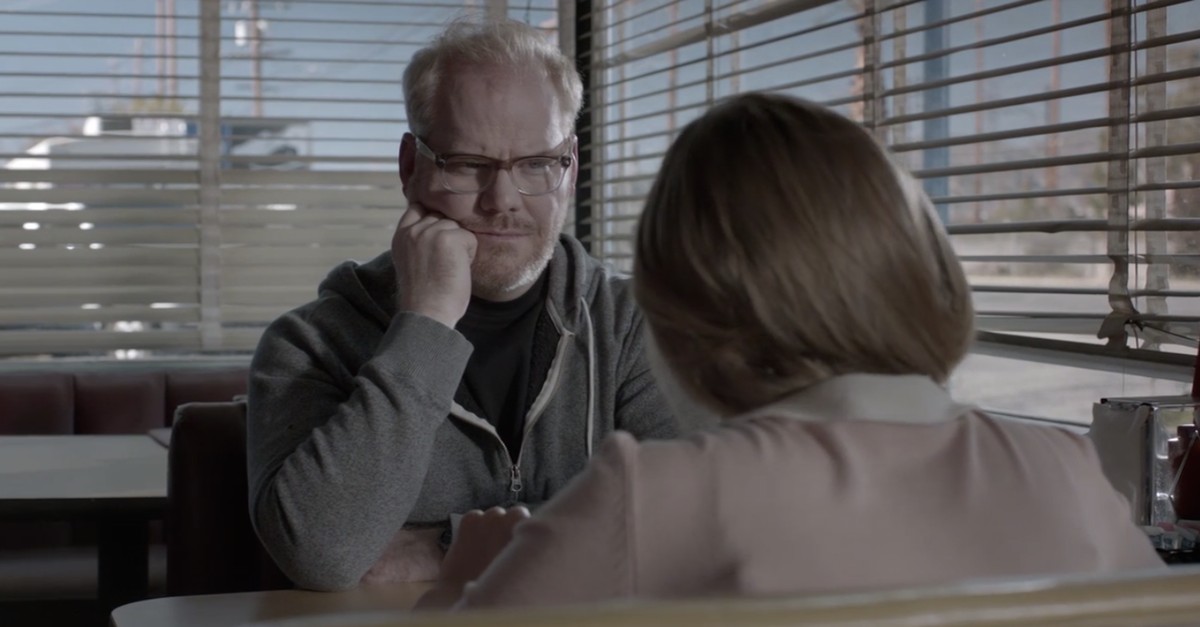 >UPDATE: Shortly after releasing this film and posting this review, it’s become clear that a significant portion of HowardCantour.com was taken without permission or credit from a comic by the legendary Daniel Clowes. We were led to believe by Shia and the filmmaking team that the story was original. The film has now been removed. This  post goes into more detail.

Created by actor-turned-director, Shia LaBeouf, as a way of trying to understand a profession that carries a lot of sway in his industry – the film critic, HowardCantour.com is an entertaining short brimming with engaging performances, snappy dialogue and crisp cinematography. Based around the inner-workings of fictional film expert Howard Cantour, LaBeouf’s latest short is a film about principles and how you deal with those beliefs when they come under scrutiny.

“A critic is a warrior. Each of us on the battlefield have the means to glorify or demolish.”

Howard (Jim Gaffigan) is an online critic, the “online” being a qualifier that he keenly feels judged for. He is someone who came up during a heady, idealistic time of zine criticism in the 90’s, but as the film industry he covers has become more commoditized, and the internet itself changes the entire attitude and nature of his profession, Howard finds himself increasingly bitter. When, at a press junket, he is given unusual access to a director he had once highly praised but whose latest film he despises, Howard’s angry solipsism is tested.

LaBeouf has written an incredibly clever script, which, in its short 12 minutes, patiently progresses through multiple interpretations. Howard is a a small man, with a little bit of power. Normally this is a figure ripe for mockery, presenting the opportunity to see the film as LaBeouf “getting back” at snobby critics. However the empathy he reserves for Howard quickly dispels that theory. Howard IS capable of sensitivity, perhaps too much so, and is tested when his former hero nakedly looks to him for approval. It is tempting as an audience to flip 180 degrees at this point and see Howard as a heroic figure—an iconoclast standing up for true artistic merit in an age of relativity. But that, I would argue is to misread the film equally. John Buffalo Mailer’s essay on the film is helpful in understanding the delicate play that LaBeouf makes here. After all, listen to Howard’s arguments against the film he’s reviewing, and his yearning for an escapist cinema based on wish-fulfillment.  The film is not a farce about a tiny man, nor an epic about a principled man. It is the kind of nuanced film that Howard himself is decrying, an attempt in a small way to reach someone’s truth. Howard’s truth is that he is a sad, disappointed man, disconnected from those around him and himself. His dislike of the film is not an aesthetic argument, but an arbitrary one based on preference. Disconnection is his life, he doesn’t want to see it reflected on the screen, instead he pines for a life that could match the Hollywood-magic he yearns for.

Tackling the subject of film criticism is always going to be an interesting choice for someone in LaBeouf’s line of work, eager to discover how the concept originated and why he decided to create a narrative around a film critic, Short of the Week spoke to the director about the inception of Howard Cantour—”I know something about the gulf between critical acclaim and blockbuster business. I have been crushed by critics (especially during my Transformers run), and in trying to come to terms with my feelings about critics, I needed to understand them. As I tried to empathize with the sort of man who might earn a living taking potshots at me and the people I’ve worked with, a small script developed.”

Revolving around a character that LaBeouf describes as “a man who lives inside his head”, the casting of Howard was always going to be a pivotal decision in the success of this short. Bringing the titular protagonist to life with a truly captivating performance, you can almost hear the gears of thought turning in Jim Gaffigan’s well-rounded, wholly believable turn as Howard. Speaking about his film’s main character and what he looked for in the actor to portray him, LaBeouf gave us an insight into the man he picked to play the forever internalizing Howard—”I was trying to suggest that there can be more to moviemaking for critics eager to make their name on a scathing review, and so I needed someone cranky as fuck and instantly likeable. I needed someone who I could believe only barely tolerates the people he runs into in real life, but remained lovable. Most importantly I needed a dreamer. Jim is that. I sent him the script with my reel and he made it happen.”

Currently gaining attention for his role in Lars von Trier’s much talked about feature Nymphomaniac, most of us will know LaBeouf for his acting roles, starring in some of the biggest blockbusters Hollywood has seen in recent years. What many may have overlooked though, is how the burgeoning director has been honing his skills behind the camera on a number of music videos and short films. With the head-shaving Marilyn Manson promo Born Villain, blood-soaked Future Unlimited video Haunted Love and Man Bites Dog styled Mockumentary Maniac all adding to an impressive back catalogue from the last couple of years, LaBeouf the director is yet to make another mark on the film industry with HowardCantour.com—his most mature and narrative-driven directorial work so far. But why short films? As staunch advocators of the format, Short of the Week couldn’t pass up the opportunity to quiz someone who spends most of his time working on feature-length projects, what it is that attracts him to this condensed medium—”At their best, short films capture the essence of storytelling without the encumbrance of pop-psychology, over-developed characterizations, and without the unnecessary weight of meaningful subplots & subtexts. Simple, universal stories that cater to my generation’s attention span.”

Whilst writing this review, a strange thing began to happen and as I felt myself empathizing more and more with the film’s protagonist, I began to experience similar concerns to those debated in the inner dialogue of Howard. Not that LaBeouf is a cinematic hero of mine (sorry Shia), but there is a certain gravitas that surrounds his name that will pull readers to this article. The more I thought about it, the more pressure I put on myself, the more pressure I put on myself the deeper I became entangled in internal debate. Have I effectively captured my thoughts on his film? Have I been too kind to his film because of who he is? …Shit! …Wait! …have I just written that all down?