Two young teens obsess about "The Raftman", a comic superhero who does next to nothing.
READ REVIEW
Next Previous 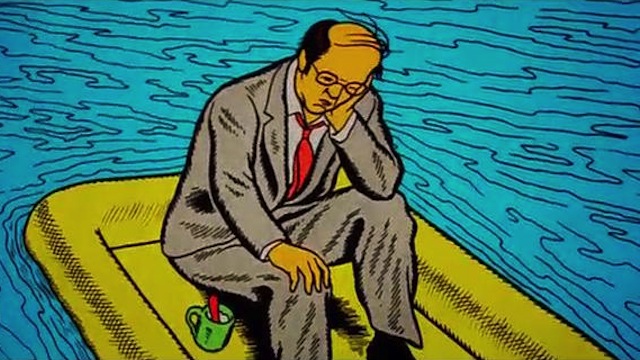 Everyone interested in comics has his or her favourite super hero. The one I prefered growing up was Spiderman because he was the one I could most identify with. He was a vulnerable teenager who despite having super powers never really outgrew his insecurities – but that’s what made him all the more likeable. With time I started to expand my universe regarding comic books and came upon superheroes who were even more like me. Scott Pilgrim had to fight the seven evil boyfriends of his new love, and although I never had to confront such drastic issues, it’s still hard sometimes to deal with the fact that of course there was someone else before you in your partner’s life. That’s why such comic books like Scott Pilgrim vs. The World could use their supernatural take and tell a basic human story. But comics don’t always have to be about superheroes. Harvey Pekar, the main character from the underground cult comic series American Splendor, was just a regular file clerk who had to deal with life’s everyday struggles and still was a compelling protagonist.

The two boys from the short The Raftman’s Razor, which played Sundance in 2005, are fascinated with the diegetic comic series “The Raftman”, which emulates the styles of underground comic icon Robert Crumb (who also drew many issues for American Splendor‘s sad sack adventures) and Daniel Clowes (Ghost World). “The Raftman” takes it one step further in that the expression “nothing much happens” applies more than anything. Every issue starts with a man stranded at sea on a raft, who wakes up, shaves himself, and for the next twenty-some pages stares out to sea without anything happening. Still, the two boys, growing up as nerds in a small town, are hooked on the “Raftman” series and choose this unlikely character as their personal hero, identifying with a certain feeling of being lost. They use every chance to blurt out the random sentences the Raftman thinks while he shaves, and get excited as a kid can be about each new issue, looking for clues as what to make of these stories.

The Raftman’s Razor uses it’s charming plot to tell a story about what it means to grow up as someone with unusual tastes and how we can find meaning and something to engage in everywhere we choose to find an interest in. Mixed with the story of the Raftman, director Keith Bearden chooses a cinematic style for the short, similar to teenager films of the late 80s and early 90s, a perfect homage to the “slacker” films of the period, which lends flavor to the world the two boys live in. The Raftman’s Razor effortlessly combines off-beat humour, melancholy, and mystery in capturing a strangely nostalgic sense of life. Personally, it adds a new favourite to the universe of comic book characters. So while Thor: The Dark World is taking in huge numbers at the box office and Superman will join Batman in Zack Snyder’s next outing, don’t forget to look for excitement in a hero like the Raftman, who can touch the lives of two teenagers by doing… next to nothing.

If you want to know more about The Raftman’s Razor be sure to listen to the podcast interview MarBelle did with Keith Bearden back in 2007 for Directors Notes, in which the director talks about his inspirations and how he managed to make money off of his short film.