In a world where every loser is pretending their life is awesome on Facebook - Allan Kasvotski's status updates are suddenly coming true [NSFW].
READ REVIEW
Next Previous 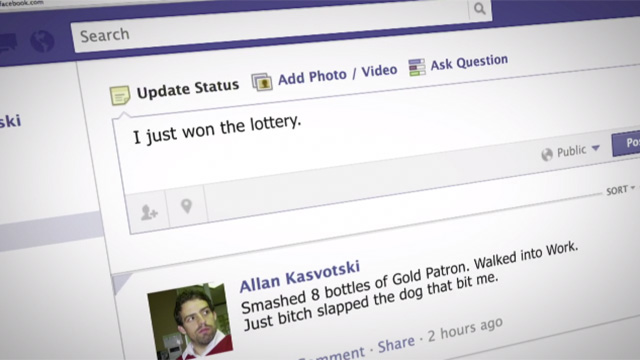 The ever increasingly popularity of social media sites like Facebook and Twitter has seen them become a popular subject for the basis of films, both short and feature length. Whether its the story of how Facebook began in David Fincher’s Social Network, a cautionary tale of online romance in Henry Joost and Ariel Schulman’s Catfish or watching a relationship fail over Facebook in Walter Woodman and Patrick Cederberg’s short fiction Noah, social media is fast becoming the film industry’s new favourite muse. The latest to tackle our growing obsession with status updates sees Australian filmmaker Daniel Reisinger provide a fresh take on the ‘wishes do come true’ narrative with his brazen comedy Status Update – A Facebook Fairytale.

With a fantastical narrative revolving around a lovesick employee who suddenly finds anything he puts in his Facebook status coming true, Reisinger’s film follows Allan Kasvotski on a hilarious journey as we discover how he puts his new found power to use. Penned by writing duo Dantie van der Merwe and David Fraser, the concept for Status Update was inspired by an ongoing battle between the director and his friends to see who could secretly alter each others Facebook status with the most outrageous message. Possibly making Reisinger’s short the first ever ‘frape’ inspired film (although I’m happy to be proven wrong if this isn’t the case).

Although this comedic production is bound to grab audience’s attentions through its lewd humour and Kim Kardashian jokes, this isn’t a film to be easily written off as content over style. The filmmaker and his team going to great lengths to ensure this is a short high on production values, as well as laughs. With a shoot lasting just over three days, Reisinger explained to me via email how they spent months fining tuning the impressive FX work – “The montage alone took 5 different motion graphics people 4 months to finish. A full year of post for 10 minutes, I often joke I could’ve made a feature in a shorter amount of time.”

With a comedy’s success measured through its LPM (laughs per minute) ratio, Status Update rolls out smutty joke after smutty joke with tales of shiny genitals, Facebook sex and unexpected friend requests. Although the humour may not be everyone’s cup of tea, connoisseurs of the darker side of comedy are bound to really enjoy the brand of humour on show in Reisinger’s film.

Having recently completed its festival tour, in which it won the Special Jury Prize at the Friars Club Comedy Film Festival, 2013 even saw Status Update granted a screening at its spiritual home, Facebook HQ in Silicon Valley.