In 1950's rural America, a postman's first day takes a terrifying turn when a precocious young girl tells him of her family's horrible tragedy.
READ REVIEW
Next Previous 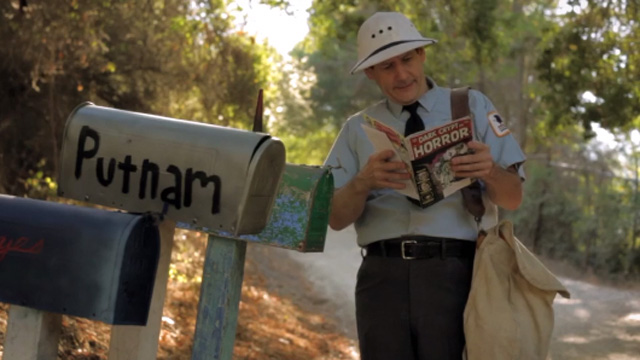 Describing itself as a period drama with a Twilight Zone twist, Luke Guidici’s nostalgic homedy (half horror, half comedy) short Certified playfully toys with audience expectations as we experience a rookie mailman’s first encounter with the Sappleton family. Adapted from Saki’s short story The Open Window, writer and director Guidici admits he was inspired to adapt this narrative for screen because of its supernatural themes and questions of reality – along with the fact its low location count and small cast numbers meant it was a film he could afford to make.

Owing a large amount of its success to the nostalgic theme running throughout its production, Guidici and his team did a sterling job of creating a style and tone that harks back to a different era of cinema. With an acute attention to detail coursing through all elements of filmmaking, Certified showcases some thoughtful design work throughout, the director even employing comic book illustrator Neil Vokes to create a bespoke graphic novel for his production. Speaking about his work with production designer Tema Staig, filmmaker Guidici admitted over email how important this sense of nostalgia was to his film – “we worked very hard to establish a very classical look. Not only did I want the film to be set in the 1950s, but I wanted it have a visual quality that felt like it could have been made in the 1950s.”

However, it’s in the cinematography of Certified where all the well-considered elements of production combine to create the evocative aesthetic Guidici craved in his short. Abandoning initial plans to shoot on 35mm, cinematographer John Matysiak and his director eventually made the decision to shoot on the Canon 5DM2 DSLR, so more of their budget could be invested in lenses (Arri Ultra Primes) and lighting – resources Matysiak claimed were extremely important for creating the classical period look of the film. Shooting from a dolly almost ninety percent of the time (mimicking the camera movement of classical period drama) and arming their lenses with a series of filters (Hollywood Black Magic and Mitchelle A,B & C filters) the cinematographer and his team recreated the retro photography style that was a necessity in Certified’s success.

Nostaglia can often come with problems though and if not done carefully this throwback style can easily end up feeling dated or generic, thankfully this isn’t the case with Certified. Its unusual inspiration making it feel unique instead of archaic and its classical approach to production meaning its director achieved that ’50s visual quality he was aiming for. Having toured film festivals worldwide, Guidici has showcased his aptitude for filmmaking with his first main foray into the world of narrative shorts, the precise methods and meticulous approach of his team meaning Certified is a production to be admired, as much as enjoyed.

With several feature length projects in various stages of production, including a comedy about Bigfoot and a supernatural action movie, Guidici is also hoping to expand on the story established in Certified with feature-length film Dark and Stormy. Described by the director as “a horror comedy that picks up five years after our initial encounter with the Sappleton family and follows a teenage Alice as her storytelling causes even more trouble.”