Ashrita Furman holds the official record for the most Guinness World Records by one individual. This is his story.
READ REVIEW
Next Previous 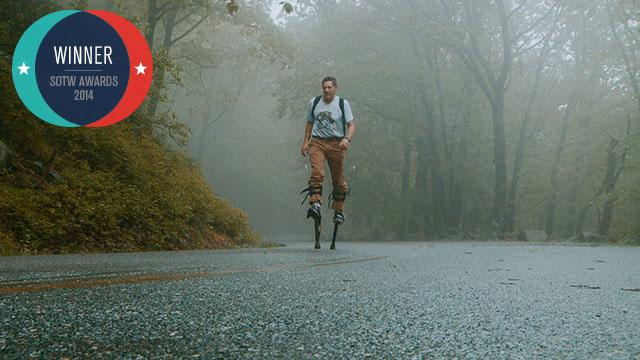 Judging by his lanky frame and glasses, Ashrita Furman may not look like the world’s greatest record breaker. But, with 160 Guinness World records to his name, he definitively is. In this short profile documentary from filmmaker Brian McGinn, we’re treated to a slice of Furman’s zany life—a story filled with ruminations on human strength, about one man’s lifetime goal to excel and prevail against the odds. Oh, and there’s also a giant hula hoop thrown in there. You know, for the kids.

Great documentaries truly live or die by their subjects, and there’s no doubt that the quirky Furman is the perfect non-fiction protagonist. Frankly, he’s just entertaining to watch. Even during a simple sit down interview, Furman has a certain spark, a genuine vigor for life that few can a match. This is a man who legitimately seems thrilled to chomp down projectile Cocoa Puffs while balancing on top of a rocking van.

Yet, McGinn’s film excels because it does more than just focus on Furman’s unconventional hobby. Rather, it takes some time to explore the method behind his own peculiar breed of madness. After all, what could compel a human being to want to run a half marathon with a milk bottle on his head? And, so the film delves into Ashrita’s views on life, on his adoption of Eastern Spirituality, and about his personal journey to overcome friction with his father. By providing this well-rounded approach, director McGinn crafts a film that is more than just an exploration of quirk, but rather a complex appraisal of  a fascinating individual. This isn’t a film that’s only about conquering unusual feats. Really, it’s a story about finding one’s own personal joy. In a quote that seems to perfectly encapsulate his life’s work,  Furman says: “I’ve been reliving my childhood my entire life up until this point.”

Brian McGinn spent nearly a year bombarding Ashrita with all forms of contact before the esteemed Record Breaker finally broke down and agreed to do the film. Unsurprisingly, Furman had been approached several times before, so it took a bit of convincing to really get him on board. Fortunately, it seems that in McGinn Ashrita made the right choice. The resulting film is as emotionally complex as it is gloriously ludicrous—here is a man who really does think it’s super important that he gets to walk up Machu Picchu on stilts. And, you know what? Just take one look at Ashrita’s eyes, at his boyish enthusiasm, and suddenly you’re on board too. Out of the way people, this here slender record breaker has got mountains to climb.