Heather "The Heat" Hardy, is a single mother and professional boxer who uses boxing as way to provide a life for her and her daughter.
READ REVIEW
Next Previous 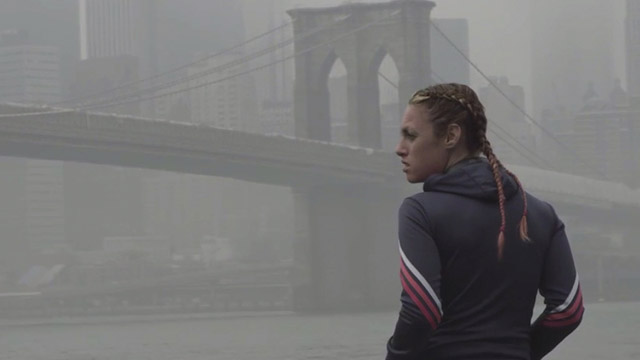 Hanging on the wall above me as I type this very sentence is a Rocky movie poster. So, I guess one could say that I’m a wee bit of a cinematic boxing fan. There’s just something about the sweet science that lends itself so well to movies. It’s pure conflict—a 20 foot square where you can face your demons head on. There’s an honest, poetic beauty in that simplicity. Train harder, fight harder and you’ve got a chance. Every underdog can have his day.

It’s with that long winded intro that I segue into Chris Eversole’s excellent short profile documentary The Heat. Admittedly, a lot of short profile pieces come through our submission page. Yet, while so many are quite well constructed, they’re usually missing that extra something—that little bit of chutzpah that can make the featured person feel real. Well, in the course of The Heat’s brief five minutes, not only does director Eversole make you care, he makes you actively root for his real-life star. Heather Hardy is a fascinating person, her tenacity and willpower inspiring. As the film continues to build, it’s a whirlwind of virtuosic cuts and jabs, a story of strong woman who is literally fighting back against all that ails her. Once, Heather Hardy dreamed of traveling the world and fighting crime. Now, in the face of reality, she swats away trouble with brute force. She fights back against the obstacles in her way, from day to day struggles to Hurricane Sandy.

Accompanied by soaring music choices and honest visual moments, The Heat is the profile documentary at its purest. Its ferocious pace charges you forward  to the conclusion, the film almost over as soon as it began. Yet, as the credits roll, you feel shaken and inspired. Ready to attack your own personal demons as well.

Working on the project with his good friend photographer Sara Forrest last year, director Chris Eversole followed Heather for four days capturing both her time at the gym as well as personal moments with her daughter, Annie. Now that Hurricane Sandy is one year behind us, Chris figured it was fitting to share Heather’s story with the world. True, Heather’s journey is far from over. Yet, this isn’t a film about completion. Rather, it’s about continuing to move forward, to punch back, to keep fighting.