When nice guy Zac finds his deepest fantasies inadvertently appearing on a computer screen, he has little hope of saving face, and even less of saving his relationship.
READ REVIEW
Next Previous 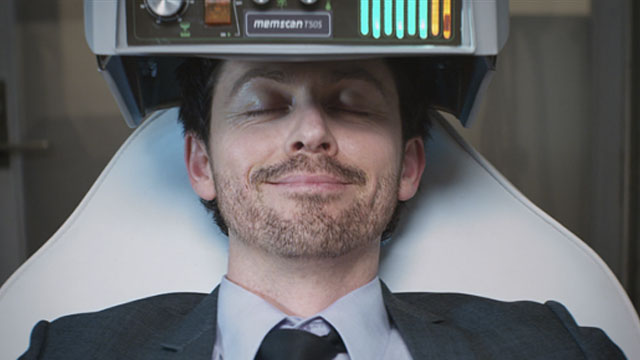 Humor and sci-fi: two genres that when mixed can produce some uneven results. For every Spaceballs you get Pluto Nash. For every Men in Black, there’s RIPD. The short world often runs into similar issues. Yet, filmmaker JJ Winlove has ostensibly cracked the proverbial code with The Mind Job—a hilarious 16 minute jaunt into futuristic criminal tracking technology, mind reading, and boobs. Lots and lots of boobs.

The premise is certainly clever: after witnessing a petty crime, a couple is sent to a neurolab where their memories can be accessed and viewed in order to catch the crook. What seems like a good idea on paper turns into a humiliating hell for good guy Zac as his innermost memories are broadcast for all to see. You see, as your average guy will undoubtedly tell you, sometimes our thoughts ain’t exactly family friendly.

It’s admirable for any short to be funny, but The Mind Job manages an even more impressive feat: it sustains that humor across a somewhat lengthy runtime. When I first watched it, I kept waiting for the other shoe to drop—for the comedic premise to run out of steam—but, fortunately, it never does. As the short progresses, it manages to find new and hilarious wrinkles to extrapolate from its ripe setup, each punchline more uproarious than the last. This is the rare comedy short that only gets funnier as things build, and thus, it elevates what could have been just another throwaway sketch into something with more substance.

Of course, the stellar production values and strong performances help in that regard. This isn’t just another comedy sketch, because frankly, it doesn’t look like one. While production quality certainly isn’t the most important aspect of a short, I’ll be the first to admit, it does help give a film a sense of prestige. And, The Mind Job is about as prestigious as you can get—that is for a short about broadcasting a guy’s internal library of spank material to the world.

The Mind Job is director JJ Winlove’s fourth short film, and was nominated for an Australia Writer’s Guild Award. His next goal? Feature-land. Winlove is currently finishing a feature screenplay about a world where digital brain implants mean everyone who dies goes to their own digital heaven – a heaven that can be anything they desire. As Winlove writes, “It’s about this really lonely guy whose job it is to design the heavens for people.” In a word: brilliant.

Beyond keeping an eye out for the feature, be sure to follow Winlove’s ambitious upcoming project called “12 Shorts, 12 Months.” As the title may indicate, Winlove’s goal is to make 12 short films, one a month, for a year. You can keep up to date and support this tenacious endeavor by liking the project’s Facebook page.