Afflicted by an overbearing speech impediment and an omnipresent mother, Lubbert's day takes a turn for the worse when he has an unexpected encounter with a group of naturist enthusiasts.
READ REVIEW
Next Previous 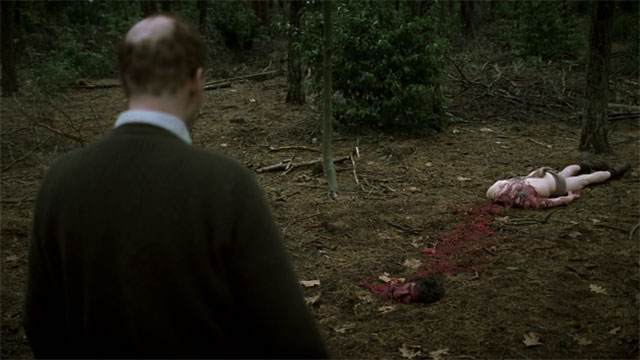 Making a big impact on the festival scene back in 2008, when it won the ‘Special Jury Award’ at the Clermont-Ferrand International Short Film Festival, as well as being nominated for a ‘Golden Bear at the Berlin International Film Festival. Marc James Roels & Wim Reygaert’s unusual short film Mompelaar went onto receive further international success when it featured on McSweeney’s short film dvd magazine Wholphin, where it accompanied SotW favourite Skhizein on the edition 9 line-up. Having originally been charmed by this plus 20-minute black comedy when it dropped through my door all those years ago, Mompelaar circulated back into my consciousness this week, when I unexpectedly discovered it on the Vimeo page of Roels (one-half of the creative duo behind the fantastic Oh Willy).

Channeling the dark humour of Monty Python (later parts of the plot share a significant resemblance to the Life of Brain) and the shooting restrictions of Dogme 95, Roels & Reygaert’s oddly brilliant short feels uncommon in both plot and production. Largely dialogue free, Mompelaar’s bizarre narrative orbits around our mumbling protagonist Lubbert, as he stumbles around the strange backwoods of Belgium, encountering energetic guard dogs and persistent tour guides along the way. Things quickly turn from the strange to the absurd when a talking decapitated head indadvertedly leads our hapless hero on the path to becoming some kind of cult leader.

Prior to production, the following list of rules was drawn up:

3. We shall use only natural or practical light sources.

5. We shall never take the camera off the tripod. Despite its production restrictions (or maybe because of them), Mompelaar is a film with a very distinct visual style. With movement and framing restrained due the lens & tripod regulations set by the filmmakers, the short’s cinematography is ruled by long static takes with the occasional pan providing the only camera movements on show. Whilst the use of ‘only natural or practical light sources’ results in the film having a realistic aesthetic, creating quite an interesting juxtaposition with its very unrealistic narrative. However, the most impressive production rule Roels & Reygaert set themselves was surely working to a ‘shooting ratio of 1:1’ – meaning that everything that was shot was used in the final cut. No pressure to get it right then? On our Submit a Film page, we state that great shorts share four qualities—that they are,  Relevant, Unique, Emotional, and Entertaining, but this is no way implies we will only show the latest shorts to hit the internet. Whether six years old or fifty (like La Jetee), strong storytelling transcends time and the best shorts will still feel significant after any period of time. Mompelaar is such a film and it has successfully stood the test of time, with its absurd narrative and unusual production methods meaning it still feels relevant and unique to this day.
Wim Reygaert Marc James Roels
LIKE TWEET