A young man has first-time sex with both male and female partners, but is he more drawn to one than the other?
READ REVIEW
Next Previous 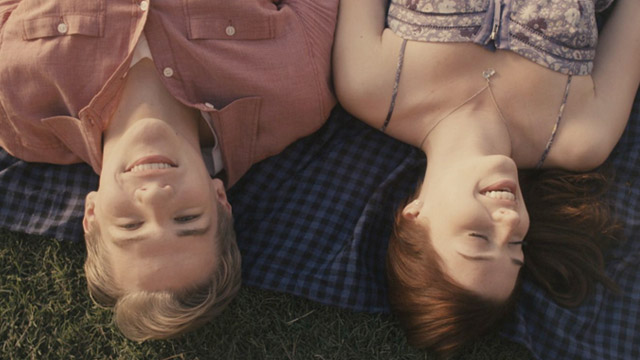 James Sweeney’s The First is a film that plays with expectations. With its sunkissed opening shots and bouncy score, the film starts off like one big ole’ romantic comedy cliché. The tropes are decidedly familiar—young love, attractive couple, an idyllic picnic on the grass. This is the stuff that Hollywood has told us is true—the saccharine syrup that has made up the montages of many a Katherine Heigl movie. Then, reality sets in. Our protagonist isn’t some stock dream boy. Rather, he’s a guy coming to terms with himself and his sexuality. And, in that exploration, he leaves a lot of confused and hurt partners (of both genders) in his wake.

Admittedly, as a straight male, most LGBT shorts tend to keep me at a bit of a distance—often times these coming of age tales are hard for me to relate to. But, here, Sweeney’s focus is more about the universal act of sex itself. Regardless of the apathetic veneer that we put up (especially us young males), sex means something. Every partner resonants regardless of whether or not he/she is your “first.” The film becomes an examination of this idea—a melodramatic relationship movie where the term “melodramatic” actually isn’t meant as a pejorative. The First proves that relationship drama is interesting provided it’s done well and you’ve got a strong enough cast to pull it off (the ensemble in this short is universally excellent). Director James Sweeney elaborates: “Drew is the protagonist, but I really see the film as a truncated ensemble piece. Bringing it back to the montage in the finale, I chose to focus on the faces of the people Drew slept with, instead of Drew himself, because they’re the ripples of his choices.”

Shot back in 2010 while Sweeney attended Chapman University, the film looks polished, sporting gorgeous cinematography and solid production design. It also features some impressive stylistic moments (the aforementioned end partner montage is both cinematic and surprisingly touching). The film played at several major festivals, finally making its way online last week. Sweeney graduated Chapman last year and is currently in post-production on his next short. He’s also simultaneously working to get a full feature off the ground. “Any interested producers/investors/Brie Larson should feel free to contact me,” jokes Sweeney. Hear that Brie? Looks like you have a potential creative collaborator just ready to work…